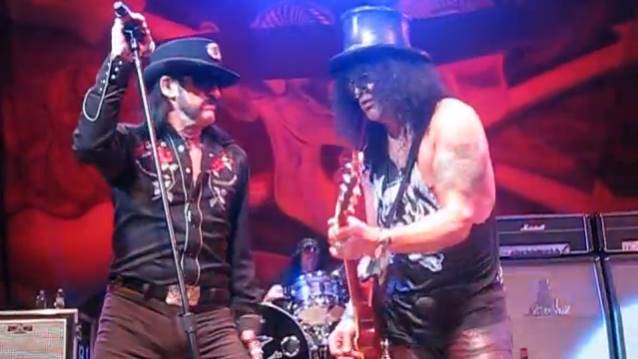 SLASH To Jam With MOTÖRHEAD At Los Angeles, COACHELLA Shows

Legendary GUNS N' ROSES guitarist Slash will jam a few tracks with MOTÖRHEAD tomorrow (Friday, April 11) at Club Nokia in Los Angeles, California. Slash will also perform select cuts with MOTÖRHEAD at both of the band's Coachella Valley Music and Arts Festival appearances on April 13 and April 20 in Indio, California.

Slash was last joined on stage by MOTÖRHEAD's Lemmy for a rendition of "Doctor Alibi" during the former GUNS N' ROSES guitarist's concert on August 2, 2012 at House Of Blues in Boston, Massachusetts.

"Doctor Alibi" comes off Slash's self-titled solo album, which came out in April 2010.

In a March 2010 interview with Ultimate-Guitar.com, Slash stated about the experience of recording "Doctor Alibi" with Lemmy, "That was another great moment; having Lemmy come down. Because Lemmy was one of those guys that I so looked up to and I still do. When I was a kid, I was one of those Lemmy fans that would bow in his presence. And we got to be friends and he's always sort of taken me under his wing kind of thing and he's always been really cool. Lemmy is one of those kinds of guys who can have a real serious attitude if he wants to. He's actually a really nice guy in general. I always thought he was sort of intimidating but he was always really nice to me. And I've had a chance to work with him; I've played on one of their records ['March or Die'] and I've done a lot of gigs with 'em. I asked him if he'd be interested and I sent him the thing and he got it right away and he came down to the studio. . . We had bottle of Jack Daniels and a couple bags of potato chips and it reminded me of when I used to show up at sessions. It was great. And the song is all about how the doctor told him how he might have to quit partying and then another doctor said, 'No, you need to continue.' It's a great personal thing; I'm really honored to have it on there.

MOTÖRHEAD canceled a handful of shows on its European festival tour in August 2013 after Lemmy suffered a haematoma (where blood collects outside of a blood vessel). The news of Lemmy's latest medical issue followed reports that he was also fitted with a defibrillator because of heart problems. The band also postponed a European headlining tour which was scheduled to kick off in November.

Pictured: Lemmy performs with Slash in October 2010 in Los Angeles