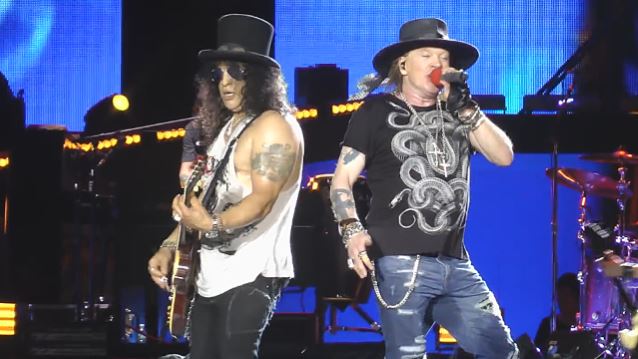 According to The Pulse Of Radio, Slash's 15-year-old son London Hudson said in an interview with the "Appetite For Distortion" podcast that his father seemed genuinely thrilled to be playing with GUNS N' ROSES again after two decades away from the group. London explained: "He seems really excited to play, that he's able to do what he loves with the guys that he loves. It's cool, 'cause a lot of the VELVET REVOLVER stuff, I don't remember how he was acting, but you can tell he's excited every show. He's nervous before every show to play. He does his 20 minutes of solitude before the shows, still."

Slash reunited with Axl and bassist Duff McKagan in 2016, launching a world tour in April of that year that has been a massive success.

Slash recently opened up to Nikki Sixx on the latter's radio program about reuniting with Axl for the first time in two decades, saying: "There's also a part of you that's like in a marriage, where you love somebody… so there's always that feeling, but then there's all this negative stuff."

Asked about the first gig that the reunited band played, at the Troubadour in Los Angeles on April 1, 2016, Slash told Sixx: "It was just fucking awesome, and it just snowballed from there... if you had talked to me 20 months ago, I would have said, 'No fucking way. It's never gonna happen.' But it did, and it was fucking awesome."

Slash added that it was "very surreal" to see Axl onstage with him again, adding, "It was completely uniquely its own new thing. Same guys, same songs, but a whole different experience."

Axl, Slash and Duff are the only classic GUNS members in the current lineup, with guitarist Izzy Stradlin and drummer Steven Adler not part of the tour. Nevertheless, the trek has been wildly successful, reportedly grossing more than $400 million since its launch a year and a half ago.

GUNS N' ROSES will return next June for a seven-week European jaunt, but the band's plans until then, and beyond that, remain unknown for now. The three core members have not given a single interview together.