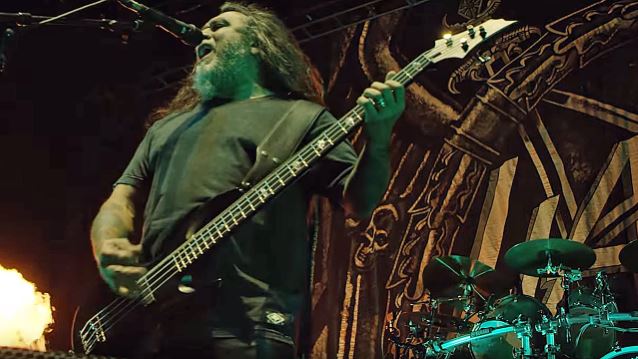 During Friday night's (January 20) broadcast of "The Rachel Maddow Show" on MSNBC, host Rachel Maddow opened the program by drawing an unlikely connection between the 2010 "American Carnage" tour featuring SLAYER, MEGADETH and TESTAMENT and President Donald Trump's grim inaugural address, which painted a bleak picture of the America he now leads, declaring, as he had throughout the election campaign, that it is beset by crime, poverty and a lack of bold action. "This American carnage stops right here," Trump declared in his speech. "From this day forward, a new vision will govern our land. From this moment on, it's going to be America first."

She continued: "You know, it's one thing if you're, like, in a metal band for a year in high school and you're 16 and you're basically made of rubber, right? But the guys in SLAYER have been doing this for a very, very long time. They've been doing this for decades. They're a very successful band. They haven't gone away. But the guys in SLAYER are now old guys. And there are just these seven little vertebrae in your neck, in all of our necks. And once you're no longer in high school, and you're an awesome metal dude who has started to turn gray, and you're still wanging your head around as part of your day job, those little vertebrae in your neck don't like it when you do that for decades. And so, in January, Tim Araya got cervical radiculopathy, which is a bad thing. And in order to deal with his cervical radiculopathy, he had to get surgery on his neck. And that was a drag for him. It was also a drag for a bunch of other aging metal dudes in his band and in other bands. It was also a drag for their fans, because him having to get surgery delayed the mega-metal all-star tour that was due to start in January 2010.

"This was an incredible tour. This was not just gonna be SLAYER — this was gonna be SLAYER and MEGADETH and TESTAMENT all playing the same concert, all playing the same night. This was an incredible tour. And because of the surgery, the whole tour had to get postponed, because the SLAYER guy had to get an anterior cervical discectomy to deal with all the consequences of all of his decades of vigorous headbanging. And nobody knew if the show would be able to go on. But lo and behold, it turns out the Almighty smiles even on bands named SLAYER, and Tim Araya recovered and we did, in the end, get — this is the important part — look at the top there [on the tour poster], see the red banner at the top there, it's kind of a bloody background. That's right — the 'American Carnage' tour. You can still buy posters, you can still buy commemorative posters from the 'American Carnage' tour. It's funny, by the time they got to their Canadian dates, they changed it to the 'Canadian Carnage' tour, but when they were in America, it was the 'American Carnage' tour. As you see on the poster there, it was a meeting of metal titans — SLAYER and MEGADETH and TESTAMENT. Even though it had been in doubt, it had to be delayed, it did happen, and for a certain generation of metal fans, that was metal heaven on earth. SLAYER and MEGADETH same night. And before today, if you were looking for 'American Carnage' in our national cultural life, that is what it was — it was when SLAYER and MEGADETH toured together in 2010 after the SLAYER guy had his neck surgery and nobody knew if he would be able to make it. That was 'American Carnage' before today. Now, as of today, 'American Carnage' will be forever known as the theme for the inaugural address of the 45th president of the United States."

This is not the first time heavy metal bands were mentioned on Maddow's program. Back in August 2012, she brought up the Tampa, Florida death metal scene in a segment debunking stories in the day's news. Three years earlier, she interviewed METALLICA drummer Lars Ulrich about a number of topics, including how he felt about his group's music being used to psychologically torture prisoners of war.