SLAYER And ANTHRAX To Join Forces For European Tour

SLAYER (pictured) will join forces with ANTHRAX and KVELERTAK for a European tour in the fall. So far the following dates have been announced:

SLAYER has set "Repentless" as the title of its new album, due worldwide on Friday, September 11 via Nuclear Blast. The long-awaited follow-up to 2009's "World Painted Blood" marks the first time SLAYER has worked with producer Terry Date (PANTERA, SOUNDGARDEN, DEFTONES). It is also SLAYER's first CD since drummer Paul Bostaph's return to the band in 2013 and guitarist Gary Holt's addition to the SLAYER touring lineup in 2011.

SLAYER's eleventh studio album will be released on the band's own as-yet-unnamed label through Nuclear Blast.

ANTHRAX is continuing to write and record material for its follow-up to 2011's "Worship Music", tentatively due in late 2015 or early 2016.

ANTHRAX last month embarked on a six-week-plus North American tour with VOLBEAT, as well as appearances at five major outdoor festivals — Northern Invasion (outside of Minneapolis),Rock On The Range (Columbus, Ohio),Rocklahoma (Pryor, Oklahoma),and the San Antonio and Kansas City Rockfests. The band's setlist features the new song "Soror Irrumator (Lords Of The Rock)", ANTHRAX's contribution to the the second installment of "Catch The Throne: The Mixtape", for HBO's Emmy- and Golden Globe-winning series "Game Of Thrones". 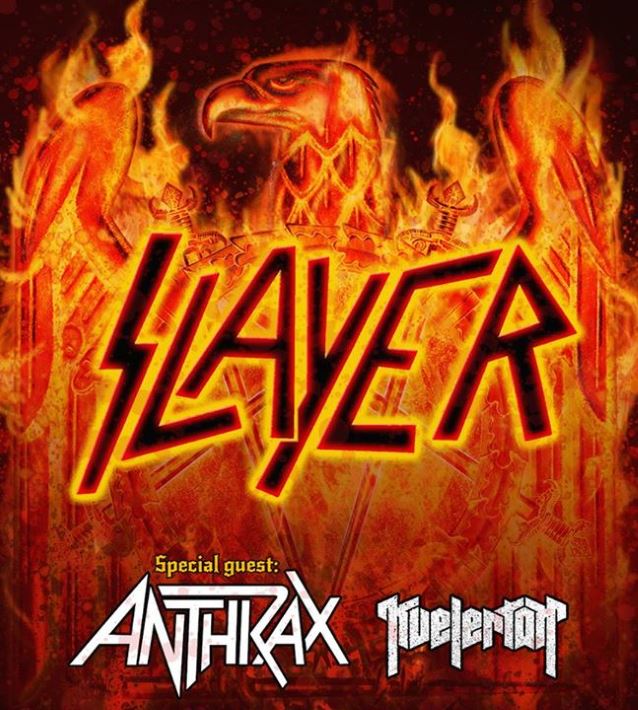