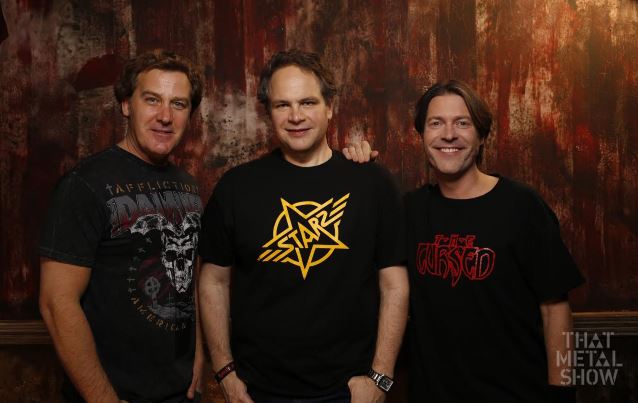 With the recent announcement of Geddy Lee (RUSH) and John Petrucci (DREAM THEATER) on the season premiere of VH1 Classic's centerpiece in original programming "That Metal Show", more guests have been confirmed for what promises to be the most diverse season in the show's history. Recently confirmed guests for this season are Frank Bello, Charlie Benante, Scott Ian of ANTHRAX, John 5 (ROB ZOMBIE, MARILYN MANSON),Chris Jericho (FOZZY),Kerry King of SLAYER, Dave Lombardo (ex-SLAYER),Zakk Wylde (BLACK LABEL SOCIETY),Michael Schenker, Ace Frehley (KISS) and Frankie Banali (QUIET RIOT). This season marks first-time appearances for punk rock legend Marky Ramone, rap icon Darryl McDaniels of RUN-DMC, Gary Holt of SLAYER and EXODUS, Taylor Momsen of THE PRETTY RECKLESS, Max Cavalera of SOULFLY, Mark Farner of GRAND FUNK RAILROAD, and Andy Biersack of BLACK VEIL BRIDES. MOTÖRHEAD and David Coverdale from WHITESNAKE are confirmed to appear on the show via the "Metal Modem". More guest confirmations will be announced at a later date.

Known for having the best musicians in music perform each week on "That Metal Show", Season 14 will continue the trend, with Petrucci making his first-ever appearance on the debut episode. Other confirmed performers are Alex Skolnick of TESTAMENT, John 5, Joel Hoekstra of WHITESNAKE, and Frank Hannon of TESLA. Making their "That Metal Show" musical debuts will be Mike Orlando of ADRENALINE MOB, and "That Metal Show" favorite Zakk Wylde. "That Metal Show" first-timers will be double-neck shred-master Michael Angelo Batio, Rich Ward of FOZZY and STUCK MOJO, Damon Johnson of THIN LIZZY and BLACK STAR RIDERS, and Nita Strauss of ALICE COOPER and THE IRON MAIDENS.

Kicking off what's guaranteed to be the best season of "That Metal Show" yet, Lee has been confirmed for the debut episode. He will be making his second appearance on the acclaimed hard rock/heavy metal talk show, hosted by Eddie Trunk, Don Jamieson and Jim Florentine. The episode will premiere on Saturday, February 21 at 9:00 p.m. ET/PT, repeating at 11:00 p.m. ET/PT the same evening.

The new season of "That Metal Show" will consist of 12 all-new episodes and will be shot at Metropolis Studios in New York City on Tuesday nights for broadcast that Saturday. Audience tickets for upcoming tapings are now available via Gotham Casting. Upcoming guests will be announced in the near future.

If previous seasons are any indication, season 14 will be the biggest season of "That Metal Show" to date. Last season marked some monumental changes for the show as it returned to New York City. Previously the show was taped over several days in a course of a week at Sony Studios in Los Angeles. But Season 13 was shot at Metropolis Studios on Tuesday nights, for broadcast the following Saturday, which will be the same for this new season.

Fans can watch previous episodes and other exclusive bonus clips at ThatMetalShow.VH1.com and on the new VH1 app.

"That Metal Show" first premiered on VH1 Classic in November 2008 and since has become the only place for all things hard rock and heavy metal on cable television. The show has been visited by some of the biggest names in the genres, including members of BLACK SABBATH, VAN HALEN, METALLICA, AEROSMITH, PANTERA, KISS, JUDAS PRIEST, IRON MAIDEN, PEARL JAM, GUNS N' ROSES, QUEENSRŸCHE, HEART, and many more.

"That Metal Show" is a production of VH1 Classic. Lee Rolontz, Jeff Baumgardner and Keshia Williams serve as executive producers for VH1.