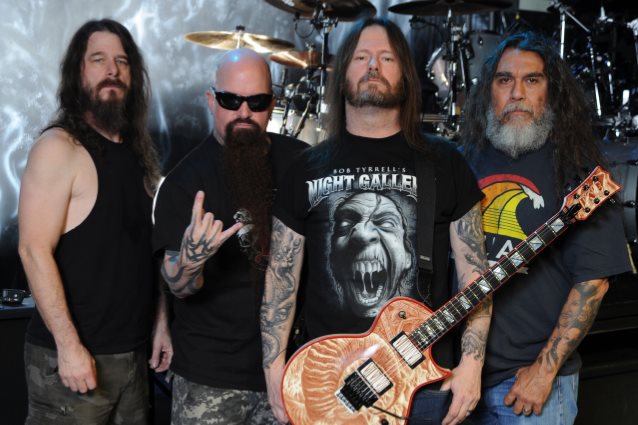 SLAYER and its record label, Nuclear Blast, have teamed with comic-book publisher Dark Horse for a three-part title based on the band's revenge-themed music videos "Repentless" and "You Against You", both of which share a story arc devised by director BJ McDonnell ("Hatchet III"). The first issue, "Slayer: Repentless, Vol. 1", will come out later this year.

"I think of the songs I write as stories," SLAYER guitarist Kerry King tells Rolling Stone. "And if nothing else, they are certainly visual. BJ managed to string it all together so it made sense."

The comics were written by Jon Schnepp, a former "Metalocalypse" director who previously helmed AVENGED SEVENFOLD's animated series based around "Hail To The King" and EXODUS' "Downfall" video.

"My philosophy as far as anybody working on anything regarding SLAYER, be it the album cover art or video concepts, is to let the people who do that for a living do it," Kerry said. "That's how we started working with [cover artist] Larry Carroll for 'Reign In Blood', 'South Of Heaven' and 'Seasons In The Abyss'. We gave him songtitles, lyrics, just things to put ideas in his head."

King admitted that he has never been much of a comics fan. "I've got a handful from when I was super young and then a handful from the early nineties when I got back into collecting sports stuff, but certainly not a ton of them," he said. "I love comic-book movies, be it 'X-Men', 'The Avengers', 'Iron Man', 'Thor', since those are always killer."

As previously reported, SLAYER will stage a takeover of San Diego Comic-Con International (SDCC). The occupation will begin on Thursday, July 21 with a special live performance at the intimate-capacity House Of Blues. SLAYER will also execute two very exclusive signings inside the walls of San Diego Comic-Con with Dark Horse Comics. These signings will take place Friday, July 22, booth #2615, and at the Nuclear Blast Records booth, #501. 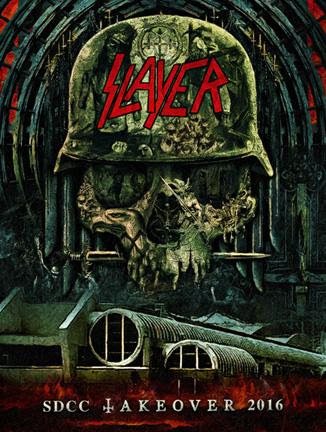