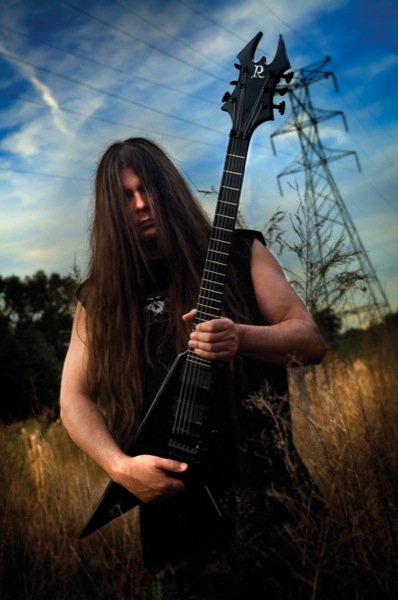 Reini of Austria's Stormbringer.at webzine conducted an interview with SLAYER drummer Dave Lombardo when the band played in Vienna, Austria on April 7, 2011 as part of the "European Carnage" tour with MEGADETH. You can now watch the chat below.

On the first show SLAYER played with Pat O'Brien (CANNIBAL CORPSE) on guitar, which took place one night earlier (April 6) in Zagreb, Croatia:

Lombardo: "[It went] really good. Pat was nervous. He was very, very nervous. But he did such a great job. He worked so hard. He only had... I don't know... five or six days [to go over the set with us]. He flew in and he immediately went to work in the dressing room. I feel he nailed it. He did everything perfect."

On the decision to hire Gary Holt (EXODUS) as the initial temporary replacement for SLAYER guitarist Jeff Hanneman, who is recovering from an infection thought to have been caused by a spider bite:

Lombardo: "Well, that was a hard decision to make. We had to think to ourselves, 'Do we cancel — again? Or what do we do? Do we keep going?' It was a difficult decision, but we had to make it — to find a guitar player to take Jeff's place until Jeff gets better. And Gary, really, was a no-brainer — meaning, we didn't have to think about it. Because at Hellfest in France [in 2010], Kerry [King, SLAYER guitarist] and myself were watching EXODUS. And SLAYER and EXODUS go waaay back. We go back to '83 or '84 when we first got together and did shows up in San Francisco together. So we saw Gary play with EXODUS [again last year], and we loved it. And Gary's performance was outstanding. So the first person that came to our minds was Gary — to take the place for Jeff. Again, it was difficult to make that decision, but we had to do it to fulfill our shows; we couldn't cancel again."

On Pat being a "much younger" guy than the members of SLAYER and Gary Holt:

Lombardo: "Actually, [Pat] is the same age as me — and [the same age as] Gary. [Interviewer: 'He looks younger.'] Yeah, he does. I told him he looked young."

On how they chose Pat to step in for Gary Holt when Holt had to leave the tour due to commitments with EXODUS:

Lombardo: "That's when I dropped out of the decision making. Kerry was on his own. And Kerry, I think, called our friend Brian Slagel [at Metal Blade Records]. He was like, 'Brian, what do you think?' I think that's the way the story happened. And [Brian] recommended Pat."

On when they expect Jeff to rejoin SLAYER on the road:

Lombardo: "I'm hoping he comes back for the 'Big Four' show [with METALLICA, MEGADETH and ANTHRAX] in California that's [scheduled to take place] on the 23rd of April. But, you know... We don't know [yet if that will happen]."

Fan-filmed video footage of SLAYER's April 7, 2011 concert at Gasometer in Vienna, Austria — featuring Pat O'Brien on guitar — can be viewed below (courtesy of FotherMucker00).