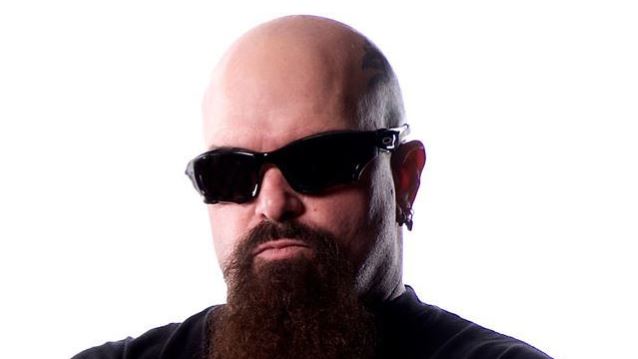 SLAYER Fans 'Will Always Get Music' From KERRY KING, Says His Wife

SLAYER guitarist Kerry King will continue making new music, even after the band calls it quits as a touring act.

The pioneering Los Angeles thrash metal band announced on Monday that it would be "moving on" after doing one last concert tour around the globe to thank their fans for all of their support over the past three and a half decades.

After the news broke yesterday, King's wife Ayesha posted a photo on Instagram of her husband apparently standing, with his mouth wide open, in front of a wall-mounted goat-headed figure with horns. "Kerry just heard the news about SLAYER's farewell tour!" she joked in an accompanying caption. "He sprouted horns! He says not to worry, you'll always get music from him."

Although SLAYER frontman Tom Araya had neck surgery in 2010 and had to give up his trademark headbanging, King said "We've picked up the slack. Me and Gary Holt [guitar] put on a show. Paul Bostaph [drums] puts on a show. Tom has actually gotten better at singing and playing bass since he's not throwing his head every which direction. So I think, at a time if we couldn't put on a show, I hope I'm smart enough to say, 'Let's do a farewell tour right now and chop it.' Don't give anybody that view of seeing you in a way that you shouldn't be seen."

SLAYER's latest studio album, "Repentless", came out in September 2015, two years after the years after the death of guitarist Jeff Hanneman, who formed the band with Kerry in 1981.

In 2016, Araya hinted that it was time to "collect my pension" after 35 years in music, although he said he still loved playing live.

Original SLAYER drummer Dave Lombardo has left the band on at least three different occasions, including in 2013, when he was once again replaced by former FORBIDDEN drummer Paul Bostaph.

Kerry just heard the news about Slayer’s farewell tour! He sprouted horns! 🤣😈He says not to worry, you’ll always get music from him. Horns behind Kerry are in our friends house @heathervondobler @cvondobler 😆😈