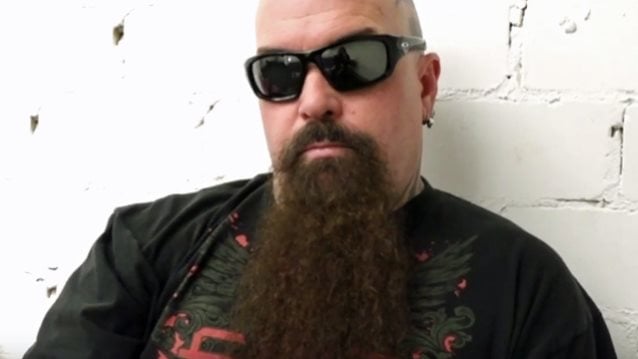 SLAYER's KERRY KING: It Gets Harder To Come Up With Setlist After Every Album

Gitarre & Bass conducted an interview with SLAYER guitarist Kerry King when the band played at the Rock Im Revier festival in Dortmund, Germany earlier in the year. You can now watch the chat below.

Asked if it's "tougher" for a band like SLAYER to play for a festival audience that is composed of some non-metal fans, Kerry said: "I don't think so, especially in Europe. I mean, we've played on shows with bands I don't even know of, and I mention it to my wife, and she's, like, 'Oh my God! You're playing with that band!' And I have no idea who they are. But that's really traditional in Europe. I mean, of course, there's metal festivals, like [With] Full Force, Wacken [Open Air] and Bloodstock, Hellfest , that are just metal, but a lot of the festivals over here, it's a big mixture."

Regarding whether SLAYER changes its setlist based on the type of festival it plays, King said: "Probably. I would say no, but this is our first show, so I'm not really in the swing of what we're gonna do this summer. But it's got a lot to do with a lot of things on a festival. Because, like here, my crew didn't even get a line check today — they showed up, plugged the rig in, it worked, that was it. So today I didn't have any clean-guitar songs in the set — I took them all out — just because we may not have time to test things properly. And I'd hate to be up there in the middle of a song and the clean [guitar] just doesn't work. So, yeah, I think about that stuff, so I took all that stuff out today. Today we're playing an hour, so we're playing, like, thirteen songs."

He continued: "You know, we're on a new record, and you try to get the new material in, but we've got a thirty-five-year career, so we've gotta get some other stuff in there. It gets more hard every time we do a record, obviously, because there's things you wanna play and there's things you just don't have time to."

SLAYER's latest album, "Repentless", was released on September 11, 2015 via Nuclear Blast. The follow-up to 2009's critically acclaimed, Grammy-nominated "World Painted Blood" was produced by Terry Date, who has previously worked with PANTERA, DEFTONES and SOUNDGARDEN. The artwork was created by Brazilian artist Marcelo Vasco in collaboration with Tom Araya and Kerry King.

SLAYER's seven-week North American tour with ANTHRAX and DEATH ANGEL kicked off in Cleveland on September 9 and hit both major and secondary markets across the continent.