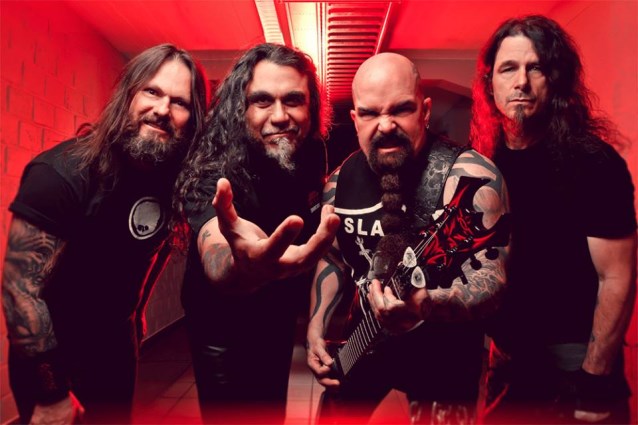 Professionally filmed video footage of SLAYER's August 11 performance at the Bloodstock Open Air festival, which was held at Catton Park, Derbyshire, United Kingdom, can be seen below.

The official Facebook page of SLAYER's current touring drummer, Paul Bostaph, has released the first photo of the lineup that has spent the past couple of months on the road in Europe, featuring original members Kerry King (guitar) and Tom Araya (bass, vocals) alongside hired musicians Bostaph and Gary Holt (guitar).

It was announced on May 30 by Araya and King that Bostaph would be behind the drum kit for the first leg of the band's 2013 international tour. EXODUS' Gary Holt is continuing to fill in for fallen guitarist Jeff Hanneman, who died on May 2 from alcohol-related cirrhosis of the liver.

SLAYER's 2013 itinerary has the band playing 35 dates that include headline shows as well as a number of major summer festivals in Europe, Eastern Europe and South America between June and October.

"Paul's a great drummer and a good friend, and we're very happy that he's decided to rejoin the band," said Araya. "We're still pretty numb from the loss of Jeff, but we don't want to disappoint our European and South American fans, and we need to begin moving forward... Having Paul back in the band makes that a whole lot easier."

Original SLAYER drummer Dave Lombardo sat out the band's recent Australian tour due to a contract dispute with the other members of the group. Filling in for him was Jon Dette (TESTAMENT, ANTHRAX).