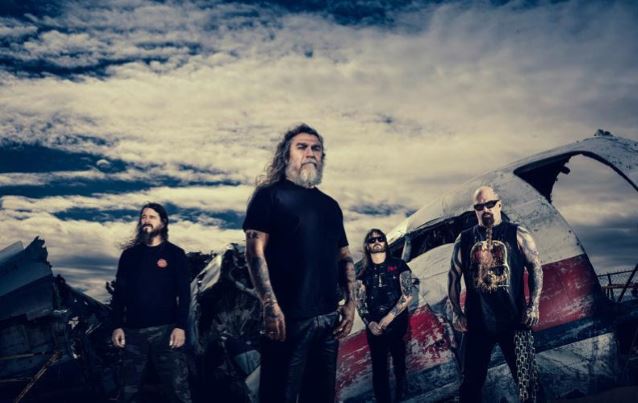 SLAYER Releases 'You Against You' Single

Today marks the release of SLAYER's new single, "You Against You", after the thrash titans unleashed their bloody music video to the world earlier this year. You can purchase the two vinyl editions of the single (in black and bi-colored versions) here.

With the video for "You Against You", SLAYER deliver the prequel to their 2015 release "Repentless", which was shot in a prison near Los Angeles. The main character is once again played by Jason Trost ("Hatchet III"),who narrates the story of his tragic imprisonment, even though he was never guilty of the crime.

For "You Against You", SLAYER travelled into the mojave desert to shoot the clip on an aircraft cemetery and find the a haunted location for their story around the prisoner named Wyatt. Again, the clip was directed by BJ McDonnell.

SLAYER drummer Paul Bostaph recently told Be In The Loop Magazine about the "You Against You" clip: "We filmed that in southern California in the Mojave desert, and it was close to an air force base. There's this guy, and he's a collector of like, airplane wrecks, decommissioned planes, that kind of thing, so we went out there and filmed it on this guy's property. It was a huge yard, and it was just amazing. He had a C-130 without the wings, and, you know, how often do you get to sit in the cockpit of one of those things? When I was done with my part of the video, I just walked around all day, sitting in cockpits, checking out these planes. It was awesome. The video is killer, definitely the most fun I've ever had making one. When you see it, just know, those aren't props — that's all real stuff."

"Repentless" was McDonnell's first stint directing a music video. He directed the 2013 horror film "Hatchet III" and has worked as a motion picture cameraman.

"You Against You" is taken from SLAYER's latest album, "Repentless", which is the band's first album to feature guitarist Gary Holt. The EXODUS axeman replaced founding member Jeff Hanneman, who passed away on May 2, 2013 from liver failure. The band's other guitarist, Kerry King, told ArtistDirect how he worked with Holt during the recording of the record. "When I did leads, I probably did half of them," he said. "Gary came in and did his. Then, I probably did the other half of mine. He got to play off of mine on some songs. I got to play off of his on other songs."

He continued: "[Gary] did 'You Against You' before I did mine. I think that one really captured me and Gary playing off each other. He did the first lead and second lead. I did the third and the fourth. The second and third sound like they were written for each other. They play really well off each other."

"Repentless" was released on September 11, 2015 via Nuclear Blast. The follow-up to 2009's critically acclaimed, Grammy-nominated "World Painted Blood" was produced by Terry Date, who has previously worked with PANTERA, DEFTONES and SOUNDGARDEN. The artwork was created by Brazilian artist Marcelo Vasco in collaboration with the band's Tom Araya and Kerry King. 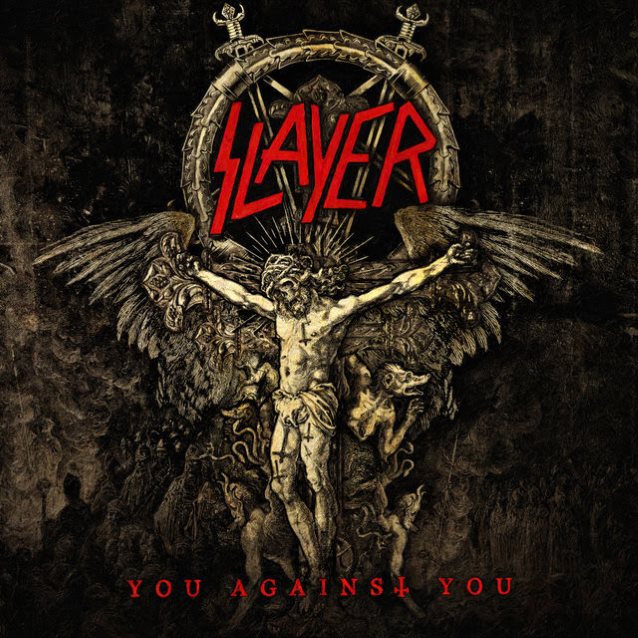