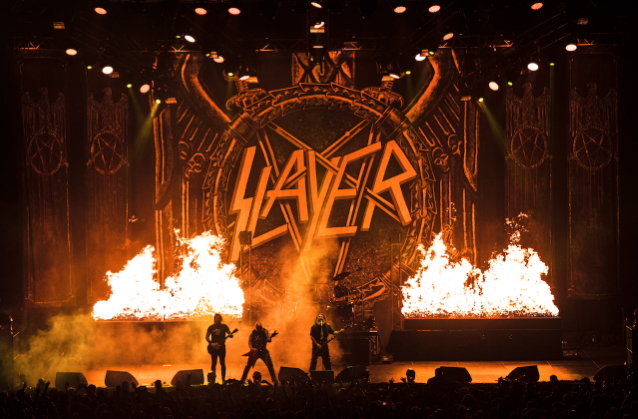 SLAYER, along with Trafalgar Releasing, Nuclear Blast Records and Prime Zero Productions, have shared the theatrical trailer for "Slayer: The Repentless Killogy", coming to theaters worldwide for a one-night-only event on November 6. In addition to the new trailer, fans can now find local theaters and purchase tickets at Slayer.Film.

Revenge, murder, bloodshed and retribution. "The Repentless Killogy" film was written and directed by BJ McDonnell, who conceived and directed the three brutal music videos — "You Against You", "Repentless" and "Pride In Prejudice" — for SLAYER's final studio album, "Repentless" (2015).

"When we set out to do these initial three videos," said McDonnell, "we had the intention of continuing the next adventures of SLAYER and Wyatt on a following album. But SLAYER announced that 'Repentless' was the final album and tour, so this story, the videos, and finally a full live concert at the end is a perfect wrap up of the 'Repentless' final tour. This is the finale of SLAYER. This is the end of the monsters."

"The Repentless Trilogy" motion picture opens with the three music videos assembled as one chronological storyline and introduces the narrative's main character, Wyatt, a former Neo Nazi associated with a gang known as "The Hand Brotherhood," whose signature mark was a bloody handprint left after a murder had taken place. Prior to the first music video, Wyatt had left the gang after he fell in love with Gina. The two had gone into hiding to escape his grisly past and start a family, but The Hand Brotherhood was not going to allow that to happen, and Gina, pregnant with their first child, was savagely murdered as Wyatt was forced to look on. The film then segues into the present-time narrative that sees Wyatt on the run from law enforcement and the Nazi gang, but now dedicated to eliminating The Hand Brotherhood and seeking retribution wherever he can.

Gerardo Martinez of Nuclear Blast Records said: "When SLAYER, the RSE family, BJ and I were talking about how thrilled we were with the outcome of the three videos from 'Repentless', never did we imagine that what we had in our hands was basically this piece of brutality that would end up in movie theaters worldwide. Everything from matching SLAYER's ferocity and heaviness in video form, to expanding into a longer narrative and live show has created the perfect SLAYER atmosphere. We are beyond thrilled to give fans around the world the opportunity to join us on November 6 to witness a pure slab of f*ckin' insanity!"

Marc Allenby, CEO of Trafalgar Releasing, added: "Trafalgar Releasing are pleased to be collaborating with SLAYER, the team at Nuclear Blast and the RSE Group on the upcoming global cinema release of 'Slayer: The Repentless Killogy'. The film expertly demonstrates how SLAYER has become one of the most influential metal bands of the last three decades, bringing together the creative forces of film and music to create a must-see on the big screen. We look forward to seeing how fans react when they come together for this unique experience." 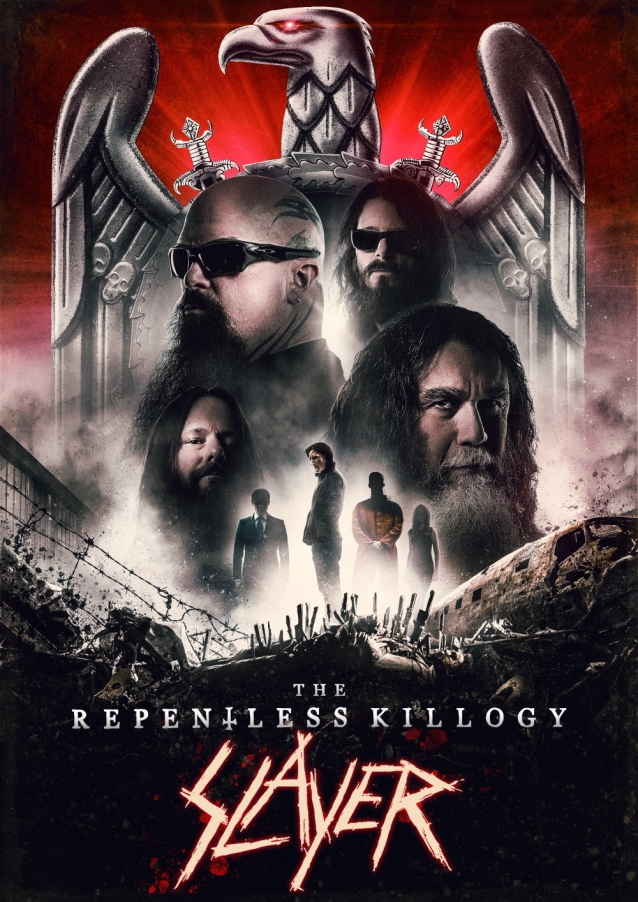