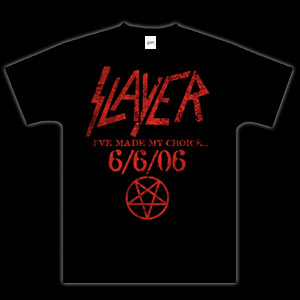 To honor the symbolic date of June 6, 2006 — the sixth day of the sixth month of the sixth year; as in 666, the "number of the beast" or Anti-christ in the Bible's Book of Revelations — SLAYER will release an exclusive t-shirt (see design here),limited to 666 units and only available at the band's official web store. The t-shirt is priced $16.66 and can be ordered at this location.

As previously reported, Warner Music Germany has uploaded the cover artwork for the new SLAYER album, tentatively due on July 25 via American Recordings/Warner Bros. Records. Check it out at this location.

SLAYER's still-untitled follow-up to "God Hates Us All", which was released on Sept. 11, 2001, is the group's first new album with their four original members since 1990's "Seasons in the Abyss". In a recent interview with MTV, SLAYER frontman Tom Araya said about the new album, "It's fast — maybe faster than anything we've done before. No one's going to be disappointed. It's going to be brutal." A snippet of a new SLAYER track, entitled "Cult", is available at the band's official web site, www.slayer.net.

SLAYER will preview their first album in five years with a five-song EP, "Eternal Pyre", exclusively available at Hot Topic stores. The CD will include "Cult", the lone new song the band plans to play live on the upcoming Unholy Alliance Tour.

Araya's two-hour May 5 minor gall-bladder surgery forced SLAYER to suspend the June 6 launch of this summer's Unholy Alliance Tour, which also features LAMB OF GOD, MASTODON, CHILDREN OF BODOM and THINE EYES BLEED. The trek will instead kick off June 15 in Camden, New Jersey, and run through July 26 in Denver.