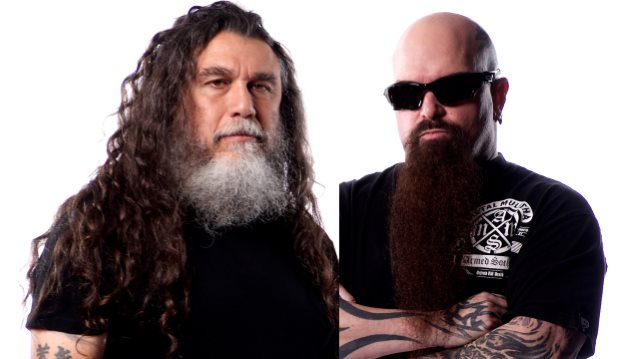 Tom Araya says that SLAYER is still working out "the business aspects of things" in the aftermath of the passing of the band's co-founding guitarist Jeff Hannemann.

Hanneman died in May 2013 from alcohol-related cirrhosis of the liver. He is credited for writing many of SLAYER's classic songs, including "Angel Of Death" and "South Of Heaven".

Asked by the Chilean radio station Futuro if there are plans for SLAYER to release a follow-up album to 2015's "Repentless", Araya said: "I don't know. I know that when we recorded the album itself, there was a lot of music [left over that didn't make the final product].

"Once we get done with what we're doing, we'll have to sit down and discuss it and talk it out.

"Me and Kerry [King, SLAYER guitarist] are still trying to put the final touches on the business aspects of things, as far as the band goes. 'Cause of Jeff's passing, we still haven't put closure to all of that, so we're still working on that, and we'll see. We'll see how things go and we'll see if there's a new album."

Araya also spoke findly about his late bandmate, just a couple of weeks before the fourth anniversary of Hanneman's death. "I miss him," he said. "Every now and then, I think about him. We were collaborators; we worked together on… He allowed me to work with him on his ideas. I think about what he probably went though the last two years. I wish he was out here with us. I wish he was here, period. I feel that he was a big part of the band. I wish he was here. It would make what I'm doing a lot easier."

Gary Holt, who is still a member of San Francisco Bay Area thrash icons EXODUS, has been the touring guitarist for SLAYER since January 2011 when Hanneman contracted necrotizing fasciitis, also known as flesh-eating disease, from a spider bite in his backyard.