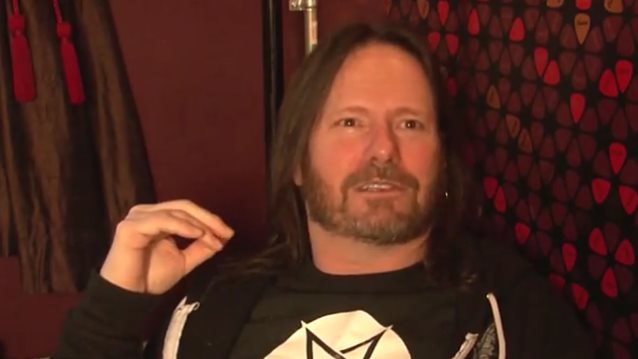 Speaking to Artisan News, Holt said (see video below): "I think it's kind of scary… frightening. Donald Trump's the likely Republican nominee. You can't believe anything he says, 'cause he's a serial liar. But, you know, what are we gonna do? I mean, the Republican party doesn't want him to win the nomination, 'cause it's gonna be the death knell for the Republicans in the House and the Congress and everywhere for years to come. People might think some of the things he says, but you can't have a president calling Rosie O'Donnell a 'fat bitch.' [Laughs] It's, like, dude, do you even hear yourself? He won't even condemn David Duke's support. He pretended he doesn't know who he is. I'm a fucking headbanger who's done more drugs before getting sober than most people have ever seen on TV, and I've been drinking since I was 17, although in recent years much less, and I know who the fuck he is. Donald Trump is running for president and he [doesn't] know who the former grandmaster of the KKK is. That was your moment, Donald Trump, to say… you know, to condemn the man, basically, but you pretended you were just ignorant of who he was, 'cause you don't wanna fuck with that vote. There are some fucking hillbillies out there who you want voting for you."

According to Holt, he has had productive discussions about the current political situation with his bandmates, some of whom don't share his views.

"I know people, including my own bandmembers in EXODUS, who, you might not agree with them, but I'd love to see some uptight, metal-hating, I-know-everything-about-politics dude go up against [EXODUS bassist] Jack Gibson in an argument," he said. "It might come to a draw. It's a debate — like, if you disagree with him, you're not gonna win — but he knows his fucking facts. And we're not all idiots. We actually do know what's going on in the world around us."

Asked whom he would vote for if the election was held today, Holt said: "Out of everybody we've got now, I guess I'd put on a blindfold and throw a dart and see if I hit Bernie Sanders or Hillary Clinton. I'd say Bernie, but my tour manager said he looks like that wacky professor in college or something. I don't know how well that'd look in a presidential portrait in the White House. And Hillary's just… she just seems a lot of baggage attached to her lately, with the e-mail scandal and everything. But definitely not Cruz, Rubio or Trump. I mean, there's gotta be a Republican out there watching who says 'fuck you' to the evangelicals, 'I don't give a shit about fucking [the landmark Supreme Court case] Roe vs Wade. Let's just work on the economy, our security and just try to turn this thing around.' And then I'd vote Republican in a second. But it's an impossibility right now, because they won't even sniff a nomination without having all those people pulling the strings."