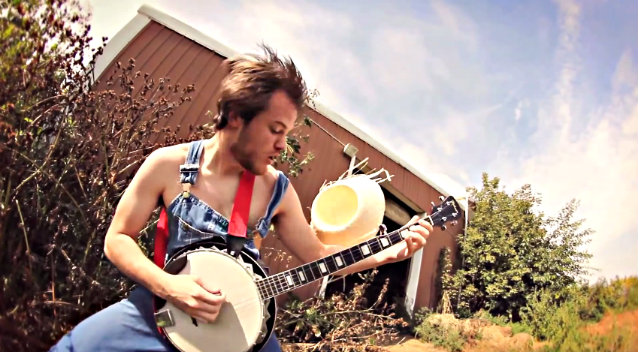 Chicago-based guitarist Rob Scallon, who became an Internet sensation in May when he released a video for his ukulele cover version of SLAYER's "War Ensemble", has returned with yet another unconventional rendition of a SLAYER song, this time with his banjo take on "Angel Of Death". Check it out below.

Asked how his project with the metal covers got going, Rob told Billboard.com: "They started really racking up steam only four or five months ago… I've been on YouTube and making money on YouTube since like 2008 — it's been like a job of mine. I was able to go full-time on YouTube about a year and a half ago. I'd always done covers, I'd always done a whole lot of different things, but these very specific metal-on-non-metal instruments really started with the ukulele video. The 'War Ensemble' video was the first one that really took off. It's just a lot of fun, so I've been doing it since."

Regarding how he makes money on YouTube, Scallon said: "There's a lot of different ways. The easy answer is just from ads. I'm partnered with Google so that revenue is split between YouTube and I. And in the case of the covers — this is actually pretty new, you weren't able to do this prior — there's a three-way rev split that makes monetizing covers possible. So with these SLAYER covers, for example, the revenue from those ads is split between Google, SLAYER's management, and myself. So everyone's happy. The last 'Raining Blood' cover had SLAYER trending on Facebook, which I was really happy about. They make money, I make money, YouTube makes money. And there's also the song sales, which are kind of a new thing. I don't really know how that's gonna turn out yet because it's really delayed, but for that I go through a company... they handle all the legal stuff so SLAYER gets their proper royalties and then I can also sell the cover on iTunes."