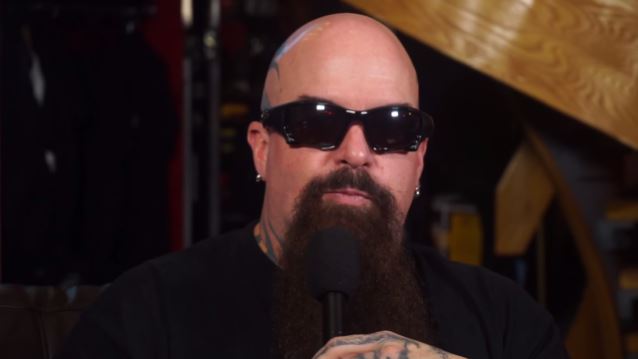 SLAYER guitarist Kerry King recently talked to Louder Noise about recording the band's new album, "Repentless", why the group signed to Nuclear Blast after spending the last twenty years with American, and the crowd response to SLAYER's new music. You can watch the chat below. Excerpts follow (transcribed by BLABBERMOUTH.NET).

On the writing process for "Repentless":

Kerry: "Well, me and Paul [Bostaph, drums], we were the only ones working on the music. You know, Tom [Araya, bass/vocals] don't get into that. And Gary [Holt, guitar] was off doing EXODUS stuff or being at home. I thought a long time about how Gary's involvement should be, and what I ended up with was, you can't have a two-guitar attack without two guitars. So he did lead on, like, seven or eight songs, I think. But, yeah, me and Paul worked together on the music until we got finished."

On switching labels from American Recordings to Nuclear Blast:

Kerry: "Nuclear Blast had a deal on the table, and being the guys me and Tom are, we said, 'We've gotta let American come to the party, see if they're interested.' That's just being loyal and being long-term commitment people; we're like that. We could have signed the Nuclear Blast deal on the spot. But we're old-schoolers and we waited for American, and American, you know… they didn't want us; you could tell by the offer. But we felt good about waiting, hearing them out and then jumped on the Nuclear Blast deal."

Kerry: "We're playing three. We open with one [the 'Repentless' title track]. I didn't know it was gonna pan out this way, but being that it's a new song and it's the first thing we do, people are just stoked that we're playing. And I don't know if they're listening, if they know it, or they're just freaking out 'cause we hit the stage, but it's electric, really. And then we go into stuff they know. And then we come back and in the second set of tunes play a couple of more [new cuts]. In the first week or so, it was weird getting that many new songs in the set, just because I haven't… I mean, sure, I played them on the record, but I may not have played — or I never did play — rhythm and incorporate the lead while I'm playing; that comes later, when you're recording. So, to rehearse it and then get on stage and go, 'Fuck! I'm supposed to be at the wah pedal. Fuck! I'm supposed to be over here.' I was a little bit of a fish out of water, and hadn't been that way for a while, 'cause we didn't have a record in six years. But it's like old-school songs now to me."

Kerry: "It's still crazy. It's still infused with young kids, and that's where the anger comes from. But it seems like we have… There's no generation gap. It's cool for your older brother, your parents, your aunts and uncles… Like, SLAYER's a family thing. And not a lot of bands are like that. [BLACK] SABBATH's like that. Ozzy Osbourne doing anything is like that. And, you know, METALLICA, [JUDAS] PRIEST… Anybody that's got any kind of long career, especially metal, it's cool… there's no weirdness if your kids like the same music. It's like a big brotherhood."

"Repentless" will be released on September 11 via Nuclear Blast.