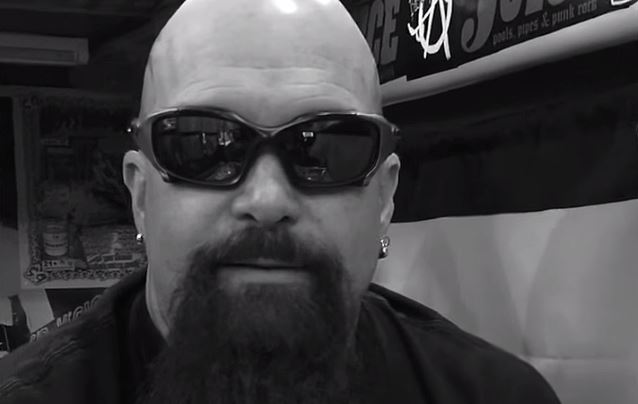 SLAYER guitarist Kerry King was interviewed on a recent episode of "In The Van" by skateboarding punk rockers the LOUD ONES as they motored through the country and temporarily kidnapped interesting characters in their renovated touring machine while sedating them with beers and questions. You can now watch the chat below.

Asked what the best thing is about being in a band, Kerry responded: "It's probably the best and the worst thing: the travel. 'Cause I get paid to go all over the world — places I would never in a million years go on my own — and that's really cool, but the travel part of it is what sucks. I mean, it sounds great. It sounds like, 'Oh, you get to go business class, you get to go first class.' And, yeah, I do. And I still get delayed and I still get thrown into lounges. And it's the waiting game. And the waiting game is what sucks."

SLAYER has set "Repentless" as the title of its new album, due worldwide on Friday, September 11 via Nuclear Blast. The long-awaited follow-up to 2009's "World Painted Blood" marks the first time SLAYER has worked with producer Terry Date (PANTERA, SOUNDGARDEN, DEFTONES). It is also SLAYER's first CD since drummer Paul Bostaph's return to the band in 2013 and guitarist Gary Holt's addition to the SLAYER touring lineup in 2011.