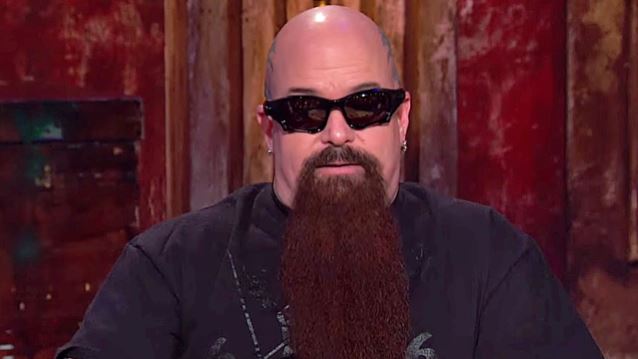 SLAYER's Kerry King says that there is a distinct lack of guitar heroes in the hard rock and heavy metal scene, with many of today's musicians lacking the "vibe" that is needed to inspire others.

King, who co-founded SLAYER in 1981 with fellow guitarist Jeff Hanneman, bassist/vocalist Tom Araya and drummer Dave Lombardo, tells LA Weekly in a new interview: "During the decade before SLAYER, and decade after, there were guitar heroes … Ted Nugent, Eddie Van Halen, Randy Rhoads, Dave Murray, Glenn Tipton, Tony Iommi. Later on, there was Yngwie Malmsteen. You had guys in the '90s like Zakk Wylde and Dimebag Darrell … people that you would aspire to be."

He continued: "We were at a festival in South America a few years ago and we were watching a video feed of the band that was playing onstage. I was watching the screen and I just did not get why this band was popular at all. I pulled [EXODUS/SLAYER guitarist] Gary Holt aside. I pointed at the screen, and asked him, 'Hey, Gary, would you aspire to be these guys?' He said, 'Not at all.' It was because they were the most boring and lethargic guitar players I had ever seen. I would never want to be these guys. I'm looking at a lot of these bands and it looks like it's the road crew soundchecking to me. There's no vibe. There's nothing that gives you aspirations to be awesome."

Kerry, whose out-of-key lead guitar playing was described by one fan as "hitting random notes really quick while destroying your whammy bar," told Music Radar in a 2009 interview that "there's nothing that says playing out of key is wrong. Of course, if you're thinking of what's traditionally accepted and bound by the 'rules of music,' you might disagree. But, to me, anything that sounds good is right. Or anything that sounds weird is right. Bend the rules."

He continued: "I never would have written some of my cooler riffs if I got all hung on what notes are in tune or what notes go together."

King added: "Bottom line: whenever somebody says 'You can't do that, because it's musically incorrect,' just give 'em the middle finger and say, 'Fuck it, I like it.'"