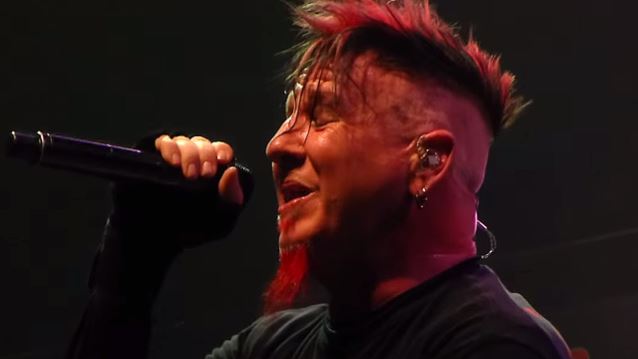 HELLYEAH's CHAD GRAY Is Excited About Writing Process For Next Album

In a brand new interview with Sticks For Stones, HELLYEAH singer Chad Gray was asked if the band has already begun writing material with its latest additions, bassist Kyle Sanders and guitarist Christian Brady. "No, not yet," he responded. "We're going to do the tour in the States, [Rockstar Energy Drink] Mayhem Festival. Then we are going to go down [to Australia], then we are coming to come back and take a little break. Then we will write some new stuff. We're all really excited about it. We feel like, for the first time ever, HELLYEAH is focused and re-aligned as what we're doing as a band."

He continued: "I don't think there's going to be any severe right or left turns from the path we're on at the moment. It's onwards and upwards. We're going to be writing better songs and I'm excited about it."

Asked if HELLYEAH's shows have changed much since the addition of Sanders and Brady, Gray said: "Absolutely. We're just like fireplugs now, man! It's crazy. Me and Kyle are just constantly stocking each other's fires. It's intense, man. We're just playing better. I think we are performing right to the edge of the envelope. Every night, it's high intensity… It's a lot of fun, man. We've had a lot of fun with this lineup and hopefully it's going to continue."

Gray also talked about how some MUDVAYNE fans were initially pissed off by the fact that he was dedicating so much time to HELLYEAH. "Oh, I'm sure [they were]," he said. "Absolutely. But, I mean, it's, like, this just felt right. It was tough. It was really hard. I don't feel like at that point with MUDVAYNE or HELLYEAH I was giving either one 100 percent. When you're doing something, you're always being pulled by the other thing, you know?! It took a minute to be, like, 'This is where I want to be.' I had to wrap my head around the fact that I play with one of my favorite heavy metal drummers of all time. I think I want to play metal with this guy. I think that's when it happened."

He continued: "[HELLYEAH] went from being a hard rock band to being a heavy metal band.

"I wanted to go back to being me.

Gray added: "I couldn't write like myself, the way that I knew how to write, in HELLYEAH, because I didn't want similarity; there had to be a clear distinction [between the two bands].

"As an artist, I think it helped me grow. Just to know that I could do that was kind of a big thing, But I did it, and now I've done it. I was just, like, 'I'm going to play in HELLYEAH. It's a good place to be, and I'm going to write the way I've always written.

"The band has grown; people have realized it more since way back in the beginning. I think there is now similarity there, too, for people that love MUDVAYNE. I write deeper, more thought-provoking lyrics, more real-life stuff, versus cold beer and that type of thing."