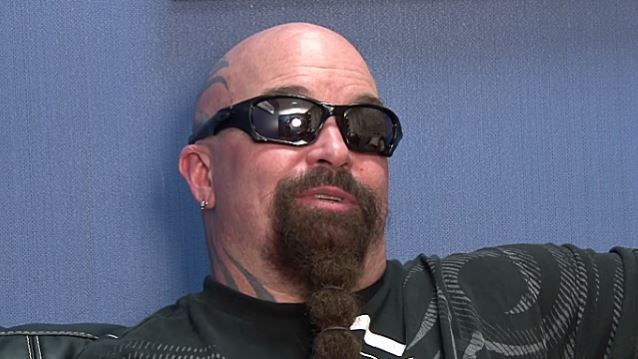 SLAYER's eleventh studio album, "Repentless", which will be released on September 11 via Nuclear Blast, will include a re-recorded version of "Piano Wire", a previously unfinished song from the "World Painted Blood" sessions written by the band's late guitarist Jeff Hanneman.

SLAYER guitarist Kerry King told Artisan News about the track (see video below): "'Piano Wire' was done on the last album, 'World Painted Blood'. [It was] probably the last song we worked on, and that's why it didn't go on the record. It was an afterthought. Tom [Araya, vocals] didn't… He didn't put a good performance on it, and it was just kind of left like that. I was intending to use it, but it needed some pizzazz. It was completely done other than that. That's my lead on it from six years ago. So we had Paul [Bostaph, drums] redo the drums on it, and Tom got comfortable with the lyrics and just went in and gave it the take it needed to be finished. And it fits in with these songs great, I think."

Rolling Stone wrote that "Piano Wire" "begins with an eerie guitar line before evolving into a full-on-doom (and classic SLAYER) riff onslaught." King put it this way: "When I hear it, I think 'Jeff.' It sounds like a Jeff Hanneman song."

Hanneman, who passed away in May 2013 from alcohol-related cirrhosis of the liver, is credited for writing many of SLAYER's classic songs, including "Angel Of Death" and "South Of Heaven".

In an interview with Loudwire, Kerry shot down a Revolver magazine report that Jeff's playing can be heard on "Repentless". He said: "Jeff Hanneman isn't physically playing on this record. Somebody reported some bullshit. People say shit when they don't know what's actually going on. [On] Jeff's song, 'Piano Wire', I played all the guitar [on it]. I've been doing that for years. Since he has no lead on that song, he's not on it."

During a November 2013 chat with Rolling Stone magazine, King spoke in more detail about the last track Hanneman wrote. He said: "'Piano Wire' wasn't on ['World Painted Blood'] because it wasn't as good as the other songs. I knew Jeff was gonna work on the lyrics and get it done. He was always talking about reworking the song."

He continued: "When you try to make a song better, you pretty much have to deconstruct it to make it better. I know there are two other ones, which are incomplete things, which he had for 15 to 20 years. Those will come out. My big thing is that I don't want people to say, 'Oh, that's a bummer that this was Jeff's last song.' I want people to say, 'This is awesome that this was Jeff's last song.'"

Asked if he has found himself tempted to write the kind of songs that Jeff might have contributed to an album, Kerry told Metal Hammer magazine in an early 2014 interview: "I think that would be shooting myself in the foot. I can't pretend to be Jeff. We both learned from each other in 30 years of writing together. As far as going out of my way to write something that Jeff might've done? I won't do that. If it happens to end up sounding that way, good for me!"