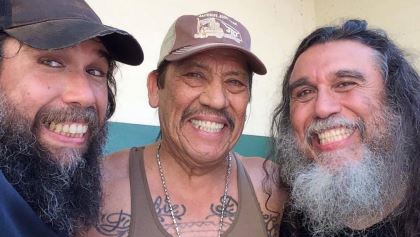 SLAYER filmed a music video for an unspecified new song yesterday (Wednesday, August 26). The clip will feature a guest appearance by actor Danny Trejo, the star of Robert Rodriguez's "Machete" film series and a frequent collaborator with the director. His previous films include "Desperado", "Con Air", the "Spy Kids" movies, and "A Very Harold & Kumar 3D Christmas". On television, Trejo had memorable roles in "Breaking Bad" and "Sons Of Anarchy".

Spent the day on the set of the new SLAYER video. Was so good to meet Danny Trejo. Such a good dude!