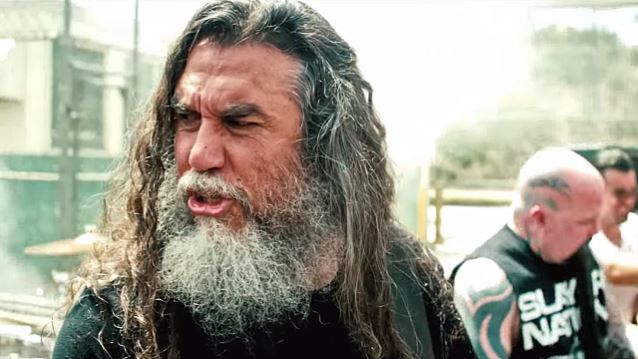 Canadian conspiracy theorist Mario Emery-Paul Brisson, known on YouTube as "The Vigilant Christian", has uploaded a 12-minute clip in which he dissects SLAYER's new video for "Repentless", the title track of the band's newly released eleventh album, and discusses the "satanic" influence in hard rock and heavy metal music. Check it out below.

Regarding the "Repentless" clip, The Vigilant Christian said: "This is pure Satanic, evil filth. There is no other way to put it.

"Those of you who know SLAYER, it's no surprise that they would put out a video like this. They're a Satanic death metal band, and they're constantly using Satanic symbols.

"Now, the majority of their fans are brainwashed to think that this is just fun, it's nothing more than art, making Satanism cool. 'Oh, it's so cool.' They're clueless to the fact that there is a spiritual reality.

"The fallen angels are in a battle right now against God and are working on this Earth to establish an antichrist kingdom, a New World Order, a Satanic, Luciferian kingdom. But to the average fan of death metal, 'Oh, this is just entertainment, man. You're taking it too far.' No, you are clueless and have no idea that there is a spiritual reality, and this stuff is, in fact, invoking demonic principalities in your life."

With over 260,000 YouTube subscribers, The Vigilant Christian's videos are usually analyses of popular culture through an evangelical Christian perspective. Mario routinely labels media and non-Christian practices as "satanic" based on a very nitpicky criteria.

Even though SLAYER's lyrical themes often ran afoul of his family's devout Catholicism, the band's frontman, Tom Araya, told NBC Latino that it didn't create much of a conflict between them. "My parents, like my bandmates' parents, were all very supportive since the beginning, they all knew their sons; as a kid I did my first Communion," he explained. "They didn't like it but they understood it. I found out later in life after my father passed away that he did face some negativity from the church community, but he never told me, I wish he would've, but he didn't and that made me very sad."