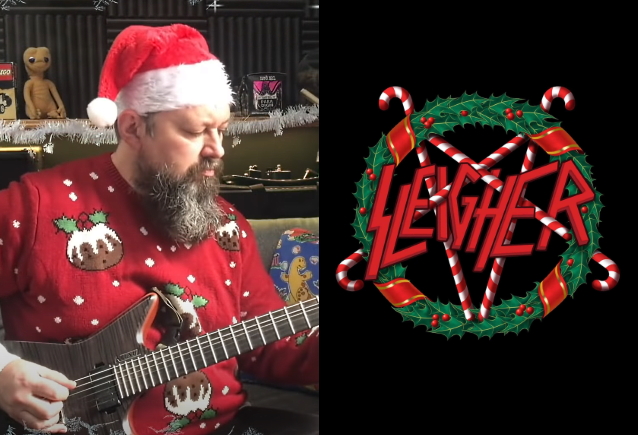 SLAYER's 'Seasons In The Abyss' Gets Christmas Makeover By Members Of DREAM THEATER, PROTEST THE HERO, CRADLE OF FILTH

Members of HAKEN, DREAM THEATER, PROTEST THE HERO, CRADLE OF FILTH and INHUMAN CONDITION have ventured south of Lapland for a festive version of a SLAYER classic. "Seasons Greetings In The Abyss" combines the music of SLAYER's "Seasons In The Abyss" with sleigh bell celebration, with alternate lyrics penned by artist and illustrator Dan Goldsworthy (ACCEPT, ALESTORM, SYLOSIS) and Charlie Griffiths of HAKEN, who also both take on guitar duties. Vocals are delivered by Canadian croon-maestro Rody "Angel Of Breath" Walker of PROTEST THE HERO and tuba (yes tuba!) is supplied by HAKEN drummer Ray "Nin Blood" Hearne. CRADLE OF FILTH's Dani-el "Awaits" Firth and INHUMAN CONDITION drummer Jeramie "Klerry" Kling fill out the core-ensemble and special guest Jordan "Captor Of Synth" Rudess of DREAM THEATER shows no mercy with a face mashing keyboard solo.

Griffiths had this to say about the collaboration: "Injecting this song with some Christmas cheer worked better than any of us expected! Apparently [SLAYER guitarist] Jeff Hanneman loved Christmas, so hopefully he would approve of our tribute and I hope we help to spread some musical merriment during yet another Christmas of uncertainty in the pandemic abyss. Thanks to all the guys for joining in with the fun and to Scott Atkins for mixing! Eternal gratitude to the all the members of SLAYER and we wish everyone a Merrytory Yuletide!"

"Seasons In The Abyss" is the title track of SLAYER's fifth studio album, which was released on October 9, 1990 through Def American Records.