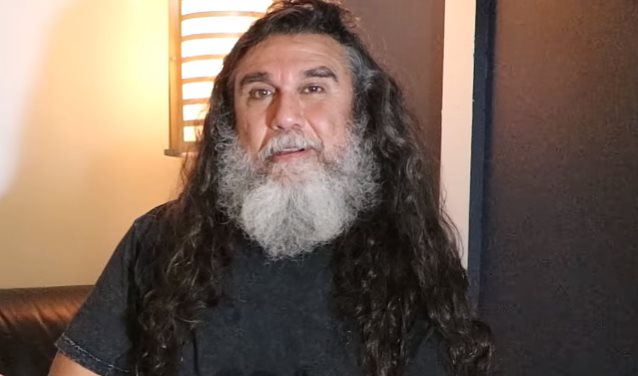 SLAYER's TOM ARAYA On JEFF HANNEMAN: 'I Feel Like I Should Have Done More To Help Him'

On Sunday, July 23, Elliott Fullam of Little Punk People conducted an interview with SLAYER frontman Tom Araya backstage at the Electric Factory in Philadelphia, Pennsylvania. You can now watch the chat below. A couple of excerpts follow (transcribed by BLABBERMOUTH.NET).

On when SLAYER will begin recording its next album:

Tom: "I don't know. When we started doing this… when I started doing this, I always wanted to be in a band and play music. And then I ended up hooking up with four guys that were like-minded, just like me, and we clicked. And then we just started playing and jamming, and then we started writing our own stuff and jamming. Next thing you know, someone says, 'Hey, I wanna do a song. I wanna do a record.' And we just kept doing that. Thirty-five years later, I find myself in a place where I never thought I'd ever be. I never really once thought about ever being where I am. And it's a business. And that was something that I really enjoyed doing because I loved it, and it slowly somehow turned into a business. It wasn't about making music, [it was about] the business of making music. So what I'm leading into is that we had Jeff [Hanneman, late SLAYER guitarist], who passed away a few years back. We never really had our business matters taken care of, as far as the membership and the band and all that stuff. That's something that me and Kerry [King, SLAYER guitarist] are, at the moment, in the middle of getting all that squared away. So as far as the next record, apparently we did record a bunch of songs, and we finished the songs for this album, and there was, like, another six or seven songs. We'll see. [Laughs]"

On whether he ever thinks about Jeff Hanneman when he is onstage playing with SLAYER:

Tom: "Yeah, yeah, because I look over and I see Gary [Holt, SLAYER guitarist] playing, but, yeah, I think about him. Especially when we do songs that me and him co-wrote. Me and him were collaborators — we wrote a lot of songs together, me and Jeff. So there's a lot of songs that we play where it's, like… And then this new album [2015's 'Repentless'], it was kind of a collaboration between me and Kerry, but not. [Laughs] That's a clue. [Laughs] That's a clue right there; I just gave you a big clue. But, yeah, I think about him a lot. Especially when we do… 'cause we always end our set with 'Angel Of Death', and that's a tribute to him. So, yeah, I think about him. You just wonder… You always think about how you wish you could have or should have done things different that went on towards the latter period of his life. In hindsight, you always wanna do… you think you should have done more, and that's how I feel: I feel like we could have, or I should have done more to help him."

Araya told Guitar World magazine in a 2015 interview that Jeff hadn't been involved in any discussions about making a new studio album prior to his passing. "Jeff kind of ... [pauses to think] He was a hard person to talk to," Tom said. "When he disappeared, he wouldn't answer calls or return texts. I would reach out to him at points, like, 'Dude, are you ever gonna respond to anything just to let me know you're alive?' And he eventually would. At one point, we had a conversation dealing with the issue of Dave [Lombardo, drums] leaving, and Jeff said he had worked out an idea for a song. And he sent that out to everybody. So he was working on stuff, but I think the main thing was really his ability to perform. It was his strumming hand, which was an important thing in the music we play, and that got to him. We kept telling him to practice, like, 'It'll get better! You might have some difficulties, but it'll get better.' We tried to encourage him to keep playing music."

Added King: "From, like, seven months after [Jeff] got hurt, we had him come to rehearsal before every tour, trying to get him back in. He was trying, but he just wasn't there. The hardest thing I ever had to say was, 'You're not ready.' That dude's been my sidekick for twenty-five years, and I have to tell him he can't go on tour in the band he's been in all his life. That sucked."

Asked if Jeff was hurt by that, Kerry said: "I don't know. That's tough. My whole thing was Gary's been out with us, for however long it was at that point, and he's fucking spot-on money. I said to Jeff, 'As much as people are gonna see you up there and not grasp, or forget, that maybe the playing is not perfect, I don't want that on YouTube for you to live with for the rest of your life.' You have to think about stupid shit like that now. But that was tough. We kept trying to get him in and it wasn't coming around. If he hadn't passed, I don't know if he ever would have been good enough to just step back into being Jeff Hanneman again."

Holt, who is still a member of San Francisco Bay Area thrash icons EXODUS, has been the touring guitarist for SLAYER since January 2011 when Hanneman, contracted necrotizing fasciitis, also known as flesh-eating disease, from a spider bite in his backyard. The infection ravaged the flesh and tissues of Hanneman's arm, leading to numerous surgeries, skin grafts and intense periods of rehab that forced him into semi-retirement and left him near death at several points.