SLIPKNOT has announced details of a massive summer headline tour dubbed "Summer's Last Stand" tour. The coast-to-coast trek will see the Grammy Award-winning group joined by a stellar line-up of special guests, including LAMB OF GOD, BULLET FOR MY VALENTINE and MOTIONLESS IN WHITE. The North American tour is set to kick off July 24 at West Palm Beach, Florida's Cruzan Amphitheater and continue through early September where it will eventually wrap up at Dallas, Texas' Gexa Energy Pavilion on September 5. Pre-sales will be available Tuesday, January 27 via www.slipknot1.com with general on-sales beginning Friday, January 30.

In other news, SLIPKNOT is officially set to top the bill at an array of spring festivals, including such eagerly awaited events as Ft. Myers, Florida's Fort Rock (slated for April 25); Jacksonville, Florida's Welcome To Rockville (April 26); Concord, North Carolina's Carolina Rebellion (May 2-3); Somerset, Wisconsin's Northern Invasion (May 9); and Columbus, Ohio's Rock On The Range (May 15-17). The band is currently on the European leg of the "Prepare For Hell" world tour, with dates scheduled in Ireland, the United Kingdom, France, the Netherlands, Luxembourg, Italy, Hungary, Germany, Norway, Sweden, Denmark, and Finland. From there, SLIPKNOT will venture to Australia, where they will headline February's annual Soundwave traveling festival, with stops in Adelaide, Melbourne, Sydney, and Brisbane. Finally, the band will return to Europe in June for a further series of festival appearances, with highlights including Germany's Rock Am Ring and Rock Im Park, the United Kingdom's Download festival, France's Hellfest, and many more. 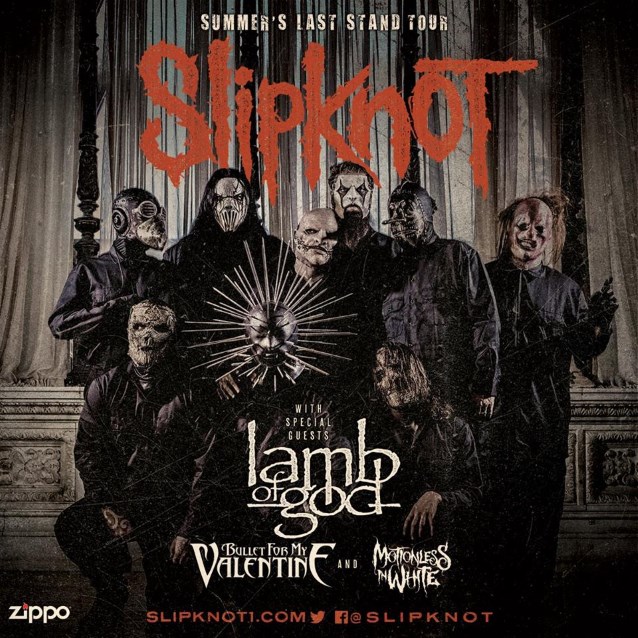