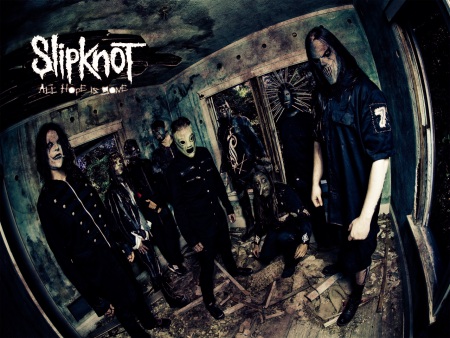 For SLIPKNOT's upcoming shows in 2011, the band has asked Donnie Steele to fill in for Paul Gray on bass.

Donnie was the original guitar player in SLIPKNOT and had actually reconnected with Paul in recent years.

Commented the band: "Donnie was in the band at the very beginning, and rather than get an outsider, we thought it would be a fitting tribute to Paul to play with someone from within the family. Donnie was great friends with Paul and we can't think of a better way to celebrate his memory than with someone who was there with us at the very beginning. The eight of us are looking forward to being onstage again and honoring Paul's legacy with our families in Europe and Brazil this summer."

Paul Gray was found dead in a hotel room in a Des Moines, Iowa suburb last May at the age of 38 from an overdose of morphine.

SLIPKNOT will make a number festival appearances this summer, including the U.K.'s Sonisphere, Belgium's Graspop Metal Meeting and Brazil's Rock In Rio.

Speaking to the Artisan News Service, SLIPKNOT frontman Corey Taylor admitted that he is still unsure going back out and performing live without Gray is the right thing to do. "It was a big decision," he said. "There's still a part of me that's kind of on the fence about it. It all comes down to the band at the end of the day and how we handle it. And if we can come together as men and handle it the right way and do it for the right reasons — do it for the fans, do it for the family — it could be the first of baby steps to see what happens in the future." He added, "The wonderful thing and the worst thing about this band is that there's no other band like SLIPKNOT, so we handle things the way we handle it."

SLIPKNOT drummer Joey Jordison said late last year that he and other members of the eight-piece band were already separately recording demos of new material, which he hoped to begin recording sometime in early 2011.

But Taylor disputed that, saying he has "no plans" to make a new album with the band anytime soon.

Following the announcement of the Sonisphere show, Taylor tweeted, "Honestly, I don't know how to feel about the tour. But it's for the fans, and for the family. We'll see. I don't know WHEN I'll be ready to make an album. Might not be for years. But we will definitely play shows. We'll see what happens."

Taylor and SLIPKNOT guitarist Jim Root have been on the road with their other band, STONE SOUR, since last summer.