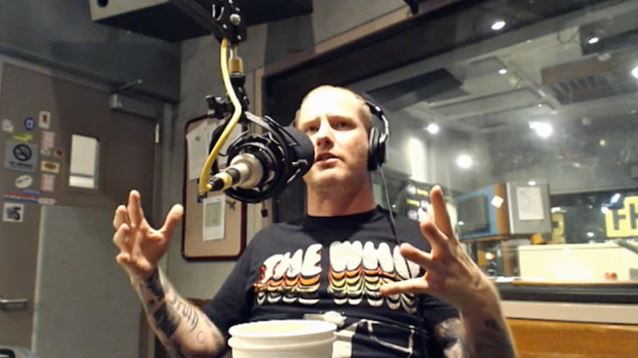 SLIPKNOT's COREY TAYLOR Is 'About 75 Percent' Recovered From Spinal Surgery

During a September 22 appearance on SEX PISTOLS guitarist Steve Jones's radio show, "Jonesy's Jukebox", SLIPKNOT frontman Corey Taylor spoke about the emergency spinal surgery he was forced to undergo in early June, when it was discovered that he had been walking around for years with a broken neck. He said: "What happened was I went in for just a routine physical. You hit a certain age, and you have to start having those old-man updates. I had just turned 42, and I went in and had physical done, 'cause I was having some stuff going on. And my doctor was, like, 'Hmm, you need to go to a spinal specialist.' So I went in and did an MRI and whatever, and what I found out was I had a very old injury in my two vertebrae — my C5 and C6 — were completely compressed together, destroyed the disc, and the bone was growing into my spinal cord. [The doctor] told me, 'I've seen MMA fighters that don't have it this bad.' He was, like, 'I can't believe you're walking.' So I had to go in for emergency spinal surgery that actually postponed the last tour I just did for three weeks. They jacked my vertebrae up, they put a replacement disc in, they shaved the bone back, and I still have a gnarly bruise on my spinal cord."

Taylor went on to say that the injury wasn't affecting his voice but that "it was affecting my body." He revealed: "I had no strength on the left side of my body. My balance was completely off. I was getting electric shocks all through my body. I was basically incontinent."

Asked how he is feeling now, less than four months after the surgery, Taylor said: "I feel great now. I'm [back to] about 75 [percent] right now. In two or three months, I should be about 80 percent. The doctor said in about a year I'll be a hundred — hopefully. He said I'm recovering really well though."

Pressed about where and when he thinks he might have sustained the injury that led to his recent surgery, Taylor said: "The only thing that I can think of is at Ozzfest '99, I fell off the front of the stage, I fell four feet and I landed on top of my head. And I think that is what did it. You know, you're 24 and you don't even process that. You're, like, 'Whoah, whatever. I'm too metal for pain.' It went on and just over the years, it's just exacerbated and just gotten worse."

Taylor was told by doctors to avoid jumping and headbanging onstage during SLIPKNOT's summer tour with MARILYN MANSON, and he told The Pulse Of Radio that the restrictions have changed the way he performs for the better. "I've had to kind of reassess what I do live, you know," he said. "But at the same time, the positive is that I love the challenge of it. Maybe I've relied on those things for too long, let's see if I can get through a show or a tour without having to go to these kind of mainstays. And the shows have been great. I've been damn near on pitch-wise, my stamina's a lot better — it's like I'm really kind of filling in all these weird blanks."

Taylor slipped and fell onstage not long into the MANSON tour, but said it looked worse than it was. He said: "I just wanted to make sure I didn’t break anything, that I didn’t re-aggravate it. The video looks terrible — but I'm laying on the ground just laughing my ass off."

SLIPKNOT will perform its 2001 album "Iowa" in its entirety at Ozzfest Meets Knotfest on Sunday, September 25 at San Manuel Amphitheater in San Bernardino, California.