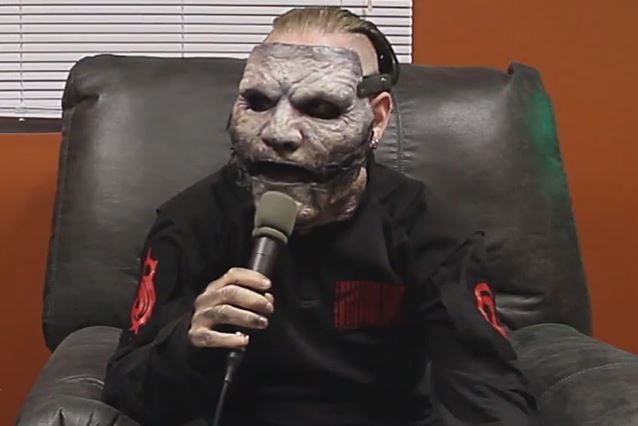 Pablo of the Minneapolis, Minnesota radio station 93X conducted an interview with SLIPKNOT singer Corey Taylor at this year's Rock Fest, which was held July 14-16 in Cadott, Wisconsin. You can now watch the chat below.

SLIPKNOT was recently forced to postpone the first two weeks of its North American trek with MARILYN MANSON after Taylor underwent what he described as "an unplanned spinal surgery." He talked to 93X how he found out he needed the operation in the first place. "I went in for an old-man physical," he laughed. "You hit 40, and you're, like, 'Okay, I've got all these issues. I'd like to know why.' I went in. I have a great doctor in L.A. And I started listing off all these things that were going on with me. We were doing the whole physical. And he's kind of the one that spotted that there was an issue with my spine. So he sent me for an MRI, CT scan, the whole big thing. He sent me to a spinal-cord specialist, which freaked me out. And then he goes, 'Yeah, you essentially broke your neck a while back.'"

Taylor said that he has known for the "last few years" that there "was something physically wrong" with him, but he ignored the problem until this past spring."The strength in my right side was completely gone," he explained. "I had the strength of an eighty-year-old, basically. In fact, I probably would have lost a fight to an actual eighty-year-old. That's how bad it was, and it sucked."

Although Corey doesn't believe that one specific incident caused all his physical ailments, he can recall a particular episode that could have been the catalyst for many of his current back issues.

"There was a host of different things, but essentially what had happened was, and the only thing that I can think of is I fell off stage in '99 and I landed on top of my head," he said. "I fell four feet off stage, landed. Being twenty-five, I just kind of brushed it off. 'I can still feel everything. I must be fine.' Meanwhile, what had actually happened was my C5 and C6 [vertebrae], basically, it was compound fracture, compressed together, crushed the disc and then slowly but surely started growing into my spinal cord. And the doctor couldn't believe that I was walking. He was, like, 'I don't know how you walked in here.' And it literally was, we went from zero to surgery like that. [snaps fingers] And that's why it was emergency spinal surgery. And everybody's, like, 'Who has that?' And I was, like, 'Hi. I do.'"

According to Taylor, he was told by his doctor that he could go out and sing two weeks after his surgery but he "waited three. I made sure that I could do something," he explained. Yeah, I probably should have waited a little longer, but I didn't want to."

Taylor also talked about the fall he took during the second show of SLIPKNOT's tour with MARILYN MANSON in Atlanta, Georgia, which had many people worried that his back issues would be exacerbated. "It looked worse than it was," Corey said. "I jumped up, and as soon as I jumped, I knew… I was, like, 'Yeah, I'm not gonna clear this.' And it was wet, and that's why. And my feet went out from underneath me. I hit my leg first, and then fell over. The reason I took my time [getting back up] was because I just wanted to make sure I didn't break anything and that I didn't reaggravate anything. I mean, the video looks terrible, but it was just… I'm laying on the ground just laughing my ass off."

Recovering from his recent surgery wasn't the only health issue the SLIPKNOT frontman was forced to contend with during the past few weeks.

"What people don't know is that literally three days [after my fall in Atlanta], I took my daughter to see 'Finding Dory'," Taylor said. "It was her first movie. She's freaking out. And she hit a wall about half way through, so I went to hand her to her mom, and she flailed and she scratched my cornea with her tiny little fingernails. So not only do I have the neck and then the fall, but then I had to go to an optometrist when I was in Boston to get antibiotics."

Taylor also talked about the status of his next book called "America 51", which is tentatively due in 2017. The book's title is a play on Area 51, the most famous military institution in the world that doesn't officially exist.

"I take the goddamn gloves off and let everybody know just exactly what I think," Corey said. "I mean, a lot of people think just by hearing that it will be very incendiary and a little too in your face, but it's not true. I mean, there's a reason I love this country, and there's things I love about it, there's things I hate about it, but there are reasons that I will always fight for. And that's kind of what this book is about. So it's gonna be me talking about good stuff, talking about bad stuff, talking about my personal relationship basically growing up on the road in this country and all the different cultures I've seen and why it's important for us all to come together now instead of tear apart. And that's really what it's about."

Taylor added that he felt it was important for him to share his point of view in the upcoming book "'cause I know there are people out there saying it, and maybe people are just missing that message. So if I chime in in my way, maybe it will relate to somebody, and then that is just a chain reaction that kind of leads us to kind of coming together."