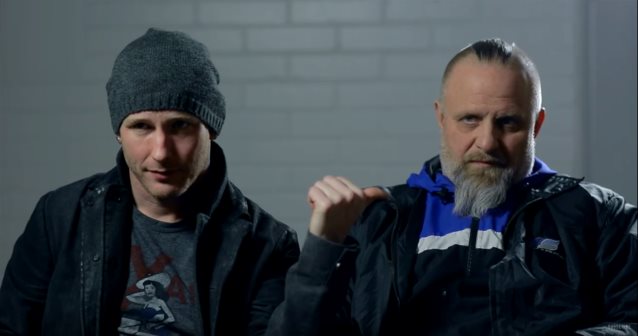 SLIPKNOT Featured In BBC Program About Why Artists Wear Masks

SLIPKNOT is featured in the latest episode of the British art magazine show "Artsnight", airing tonight (Friday, February 5) at 11 p.m. on BBC2.

The program, which explores why artists wear masks, includes new interviews with SLIPKNOT frontman Corey Taylor and percussionist Shawn "Clown" Crahan. They discuss the origins of their masks and why they wear them as part of their art.

Taylor talked about how seeing SLIPKNOT perform two years before he joined the band made such a lasting impression on him. He said: "I was there for the very first SLIPKNOT show. I was in the audience. This was before I'd joined the band. It was so many different things all at once. It was visual, it was visceral, it was antagonistic, it was dangerous, it was powerful. I'd never seen a band like that before. It was taking everything that had been done creatively, artistically, visually and, to me, taking it to such a different realm. And I loved the fact that every mask was different, because it represented a different person. It wasn't all linear and just kind of thrown together. It really felt like everyone had put a lot of time and thought into what they were doing. So when I did join, after some trial and error, I came to emboss that theory on to the mask that I was wearing."

"Everyone who wears a mask, embrace it, because you're not being somebody else; you're being yourself. And the closer you can get to that middle, to getting to know that honesty, is better for everybody, because then you can actually be yourself."

Crahan, who is also the art director for SLIPKNOT and directed their DVDs, explained how his iconic clown mask was the one that started the whole idea. He said: "I had gotten a version of this mask when I was 14. And I was just drawn to it, and it was awesome. And I just never knew why it was in my world, but it was always around me. And then one day, it just so happened, it was that moment of clarity [that helped me] decide what I wanted to project. I'm being taught something, more and more and more, and I haven't even figured it out yet. This thing has no fucking limits."