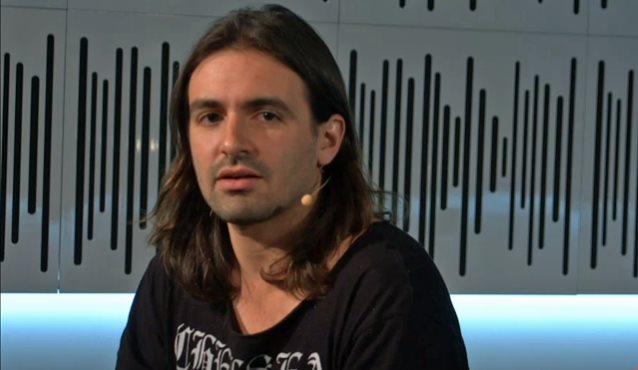 SLIPKNOT's JAY WEINBERG: 'I Love Playing Drums 'Cause I Get A Sincere Joy Out Of Doing It'

SLIPKNOT drummer Jay Weinberg recently took part in a question-and-answer session with Mike Ciprari of SJC Custom Drums in the Gear4Music studio. You can now watch the discussion below. A couple of excerpts follow (transcribed by BLABBERMOUTH.NET).

On what advice he would give to young drummers who are just starting out:

Jay: "The best advice is just to always have fun and always do it because you're having fun. I love playing drums 'cause I get a sincere joy out of doing it, you know. Always do it for fun and, yeah, have ambitions and have dreams that you wanna attain, but attainable goals. All I ever wanted to do when I was 14 was maybe one day, if I start a band and stuff, we could play the local bar across the river from where I lived. That was my goal when I was 14, and that was the endgame. And then once I achieved that, and the band that I put together with my friends achieved that, then it was to play the other place that's, like, half an hour away. And then it was, 'Let's play out of state.' 'Let's write a bunch of songs and record 'em and make a record,' and all that. So it was always short-term, little attainable goals, and then that just… after keeping doing it, just 'cause you're excited to keep pushing yourself as a drummer and keep pushing your band, or whoever you're playing with, keep pushing into attainable goals, and once you've reached some place, you try and reach some place else. And eventually that snowballs in and of itself, and years later you can look back and be, like, 'Wow, this is crazy stuff that we did.'"

On whether he prefers performing live or recording in the studio:

Jay: "The cop-out answer is really, 'Well, they're both different, and I do enjoy them both,' but, for me, the live experience is where it's at. I really enjoy making records, and it's a tough process and to make something good that you're proud of artistically is challenging, and I like that challenge. Always trying to push yourself and always trying to make a recording that represents where you are at that time, I enjoy that, but, for me, the work starts when that's done, because it's really about the live experience, and that's what's really exciting for me. And I think, like any band that I've played in, that's where everything really comes alive. That's where rock bands really… that's just where it becomes interesting. 'Cause then it's a live, breathing thing, and you're there, and it could fall off the rails at any moment. And it's risky, it's energetic, and you're there for a specific performance in time that won't be duplicated exactly like that. So, for me, I'm gonna go with live. Even though I really like going between the two and making records and listening back and being proud of a recording, I think live is just where it's at."

Weinberg, 26, discovered SLIPKNOT when he was ten years old, through his father Max, of Bruce Springsteen's E STREET BAND, and leader of the house band on Conan O'Brien's talk show. He "was hooked immediately" and was a huge fan of SLIPKNOT by the time he was invited to Los Angeles to try out as replacement for Joey Jordison in 2013.