A spectacular lineup including some of the biggest names in rock has been announced for the fifth annual Monster Energy Carolina Rebellion, set to take place May 2-3, 2015 at Rock City Campgrounds at Charlotte Motor Speedway just outside Charlotte, North Carolina.

Corey Taylor of SLIPKNOT says, "We are very excited to be headlining Rebellion this year! We're honored to be playing in the company of CHEAP TRICK, one of my all-time favorites, as well as playing with such good friends like KORN, HALESTORM and SLAYER!"

"Three years ago, we reunited with our brother Head on stage at Carolina Rebellion. Since then, we made a new album and toured the world together. And now we're back to perform our first album in its entirety. Rebellion is going to be a really special show for us," says Jonathan Davis of KORN.

"Playing with a band like THE CIRCLE, we've got a set list made in Rock N' Roll Heaven and a band from Rock N' Roll Hell," says Sammy Hagar. "The only missing link is tens of thousands of rocking fans… HELLO CAROLINA!"

"For the 5th annual Monster Energy Carolina Rebellion, we wanted to acknowledge not only the best in current rock with the likes of SLIPKNOT, GODSMACK, BREAKING BENJAMIN and more, but also celebrate some great iconic rock bands like SAMMY HAGAR & THE CIRCLE, CHEAP TRICK, SLAYER and others to give the Rebels the widest range of Rock N' Roll possible,” says co-executive producer Gary Spivack of RockHouse Presents. "Rebellion is truly the Carolinas' biggest music party of the year!"

Based on the festival's success in 2014 — with over 60,000 fans in attendance and camping and VIP packages sold out — the 2015 Monster Energy Carolina Rebellion concert site will be expanded and will feature a fourth stage for band performances.

The daily band lineup for Monster Energy Carolina Rebellion is as follows:

A ticket pre-sale for Monster Energy Carolina Rebellion is underway now until Friday, January 16 at 11:59 a.m. ET. The pre-sale offers a limited number of tickets for the following early bird pre-sale prices (plus fees):

Ticket prices will go up at the public on-sale on Friday, January 16 at noon. Concertgoers are encouraged to buy early to save, as ticket prices will continue to increase in the coming months.

A VIP Lounge Upgrade is also available for $110 to those that purchase Weekend General Admission tickets during the pre-sale and general on-sale.

Monster Energy Carolina Rebellion 2015 layaway packages — new for 2015 — are available for purchase through January 31. A limited number of discounted tickets are also now available for active military through GovX.

For full details and to purchase tickets, hotel, and camping packages, visit www.CarolinaRebellion.com. 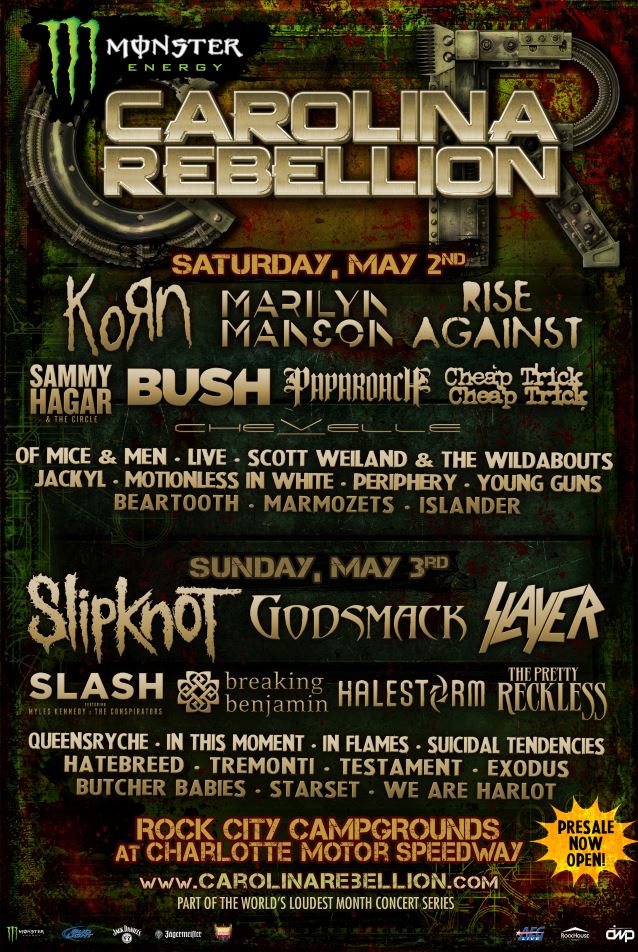