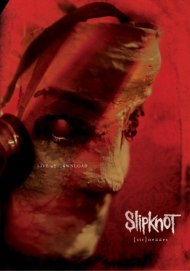 SLIPKNOT headlined the annual Download festival in the U.K., performing in front of 80,000 of their rabid fans. The performance was absolutely electric, in typical SLIPKNOT fashion, especially since it came hot on the heels of one of the strongest years in SLIPKNOT's illustrious career.

It was indeed a year of "firsts" for a band that was a decade-deep into their hard rock superstardom and dominance. Their latest album, 2008's "All Hope is Gone", debuted at #1 on The Billboard 200 chart — the first time in their history. SLIPKNOT embarked on a two-year touring trek that was globally successful, playing to packed houses across continents, including their headlining stint at New York City's legendary Madison Square Garden, which was stacked to the rafters and chronicled by Rolling Stone.

It makes perfect sense that the band, known for their eclectic DVD collection, ranging from multi-camera angle concert documents to arthouse-style films, would release "(sic)nesses", which captures a special performance at Download. All SLIPKNOT shows are memorable, but this one is particularly memorable, as the band blasted through hits from all of their platinum albums. On stage is SLIPKNOT in its most natural state and "(sic)nesses" will put you in the front row.

30 cameras were on hand to capture every possible angle of the band as they motored through their parade of hits; the cameras also caught the fans on tape, as they are just as crucial an element of a SLIPKNOT show as the band members themselves.

Perhaps most importantly, "(sic)nesses" is one of the final major performances for founding member Paul Gray, who tragically passed away in May 2010. While initially unintended, the concert is a testament to the legacy of Gray, where fans can enjoy a lasting glimpse of the bassist doing what he loved most.

Additionally, the DVD also includes a 45-minute behind the scenes documentary created by band percussionist Clown, as well as all four music videos from the "All Hope Is Gone" cycle.

Lastly, "All Hope is Gone" has gained platinum status, capping off a passionate, turbulent and ultimately unforgettable album cycle.

Due on September 28 via Roadrunner, "(sic)nesses" features the following track listing:

* "Audible Visions Of (sic)nesses" - 45-minute film directed by M. Shawn Crahan that captures SLIPKNOT on the road during the "All Hope Is Gone" cycle