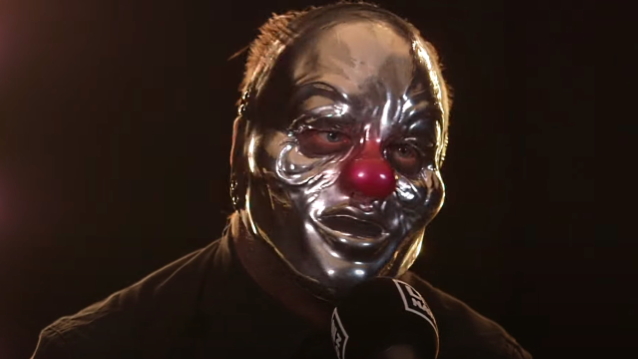 SLIPKNOT percussionist M. Shawn "Clown" Crahan has told The Face in a new interview that his recent 80-pound weight loss has enabled him to indulge his surprising secret passion: dressing in high-end designer clothing.

"I didn't like who I was physically," Crahan told the magazine. "So I worked really hard in the last five years to get to where I've always dreamt and it’s actually happening. I'm able to go to the places I've always wanted to."

Crahan said that he was into unforms while growing up in Des Moines, Iowa and he also watched his father dress up for a day in the office. Later on, he spent 12 years attending a Catholic private school where a strict dress code was enforced.

"But after high school, I got really out of shape and it kept me away from the stuff I love," he admitted.

Crahan also paid tribute to late British fashion designer Alexander McQueen, a visionary who transcended the fashion world to become an internationally recognized artist. McQueen's runway shows often blurred the line between straight fashion and performance art, and his collections were often chic and shocking all at once.

"Alexander McQueen was my gateway into fashion," Crahan said. "What I do and the energy I bring to SLIPKNOT is very similar to what he did.

"I understand those shows and the risks he took — it felt perfectly natural when I stumbled across it. It really made me feel like I belong."