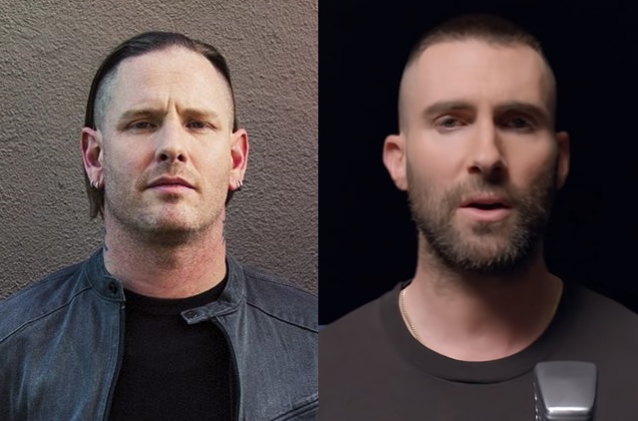 Corey Taylor has called Adam Levine a "schmuck" after the MAROON 5 singer blasted the current rock scene as lacking the "innovation" of hip-hop.

In a brand new interview with Variety, Levine was asked which genre of music he and his bandmates fit into: pop, rock or urban. He responded: "Something unique to this band is that we have always looked to hip-hop, R&B, all rhythmic forms of music, from back when we were writing our first album to now.

"Rock music is nowhere, really," he continued. "I don't know where it is. If it's around, no one's invited me to the party.

"All of the innovation and the incredible things happening in music are in hip-hop. It's better than everything else. Hip-hop is weird and avant-garde and flawed and real, and that's why people love it."

Levine added: "My goal is to make songs that don't sound dated 10 years later. My main criteria for a song is, can I live with it forever? And if I can't, I just don't have the heart to do it. It's that simple."

After a fan tagged Taylor on Twitter by saying that Levine's comments "angered" him so much that he needed the SLIPKNOT and STONE SOUR singer "to rip him a new one or something," Corey happily obliged, writing: "Just because you claim to have 'Moves Like Jagger' doesn't mean you come anywhere CLOSE to ROCKING like Jagger. Tell that schmuck to go back to The fucking 'Voice'"

STONE SOUR producer Jay Ruston, who has also worked with ANTHRAX, URIAH HEEP and STEEL PANTHER, chimed in, tweeting: "When Adam Levine or anyone else in that genre can consistently sell out stadiums around the world like METALLICA, MUSE, SLIPKNOT, IRON MAIDEN, RAMMSTEIN, AC/DC, GUNS N' ROSES and THE ROLLING STONES then I'll care what he has to say about the death of rock."

Taylor previously dismissed the notion that rock is dead, telling Tina Smash of the Jacksonville, North Carolina radio station Rock 105.5 in a 2014 interview: "Rock and metal ain't dead. They're just waiting to kill you. And I mean that. It's an ebb and flow. It's like that probably every — what? — ten [or] fifteen years. There's an ebb. But it's definitely coming back."

The 39-year-old Levine has been a judge on "The Voice" since the Emmy award-winning NBC music competition show's very first season.

Just because you claim to have ‘Moves Like Jagger' doesn't mean you come anywhere CLOSE to ROCKING like Jagger. Tell that schmuck to go back to The fucking ‘Voice' ?? https://t.co/tFm0VHvV82

When Adam Levine or anyone else in that genre can consistently sell out stadiums around the world like Metallica, Muse, Slipknot, Iron Maiden, Rammstein, AC/DC, Guns N Roses and the Rolling Stones then I'll care what he has to say about the death of rock. https://t.co/KjWvv8gy7t