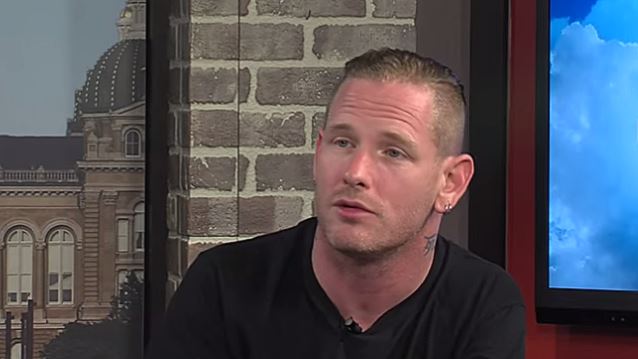 SLIPKNOT and STONE SOUR frontman Corey Taylor recently spoke to U.K.'s Kerrang! magazine about being tapped by the producers of "Doctor Who" to lend his "deep and terrifying roar to the alien warlord known as Fisher King" in the October 10 episode of the BBC television series.

Asked how his involvement with the show came about, Taylor said: "Dude... So, what happened was, while we were on tour with KORN [earlier this year], we were approached about doing the tour of the Doctor Who Experience [the BBC's thrilling family attraction in Cardiff], and I was asked whether I would be interested in doing something for the show. And I freaked the fuck out."

He continued: "I've been a 'Doctor Who' fan since I was a kid. It's been a part of my life forever. So, of course, the answer [to their offer] was,'Fuck yeah!' We went down, I took a million pictures, and then we went to BBC Wales. They described the character that I was going to be vocalizing, and I screamed into a mic for about an hour. [Laughs]"

Fisher King was previously described as a massive green alien that has tons of horns protruding from his body.

Fisher King is played by Neil Fingleton, the tallest British-born man and the tallest man in the European Union at 7 ft 7.56 in (232.6 cm) in height, and his speaking voice is "Shaun Of The Dead"'s Peter Serafinowicz.