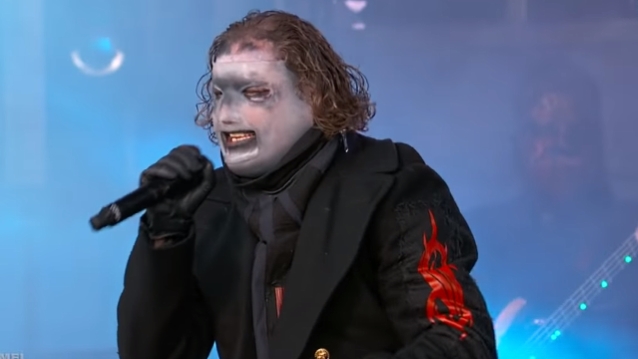 SLIPKNOT frontman Corey Taylor claims to have suffered an unfortunate injury less than a month after undergoing surgery on both knees.

The singer took to Twitter on Wednesday (May 29) to ay that he "blew out" a testicle while practicing vocals for SLIPKNOT's upcoming European tour, which kicks off next week at Rockfest in Hyvinkaa, Finland.

He wrote: "Working on my '87 Dokken high notes this morning. Fucked around and blew out the left testicle. Careful on re-entry, kids."

When one of Taylor's Twitter followers joked that Corey will now be able to sing SLIPKNOT's "Surfacing" in soprano, Corey quipped: "I can do the guitar intro falsetto."

Another fan chimed in: "If you pee blood WHILE screaming Dokken, I think you become the new king of metal. There would be a ceremony and everything."

Corey responded: "They'd have to forgive me for not standing during the ceremony."

Taylor underwent surgery on both knees earlier in the month and recovered in time to appear with SLIPKNOT on "Jimmy Kimmel Live!" on May 17. He also played a solo show two days later in Garden Grove, California.

SLIPKNOT's "Knotfest Roadshow" headline tour will take place in North America this summer. VOLBEAT, GOJIRA and BEHEMOTH will join as special guests on all dates. Produced by Live Nation, the 29-city outing will kick off July 26 in Mountain View, California at Shoreline Amphitheater and continue through September 8 where it will conclude with a performance at Cynthia Woods Mitchell Pavilion in The Woodlands, Texas.

Working on my ‘87 Dokken high notes this morning. Fucked around and blew out the left testicle. Careful on re-entry, kids. #kissofdeath#pissinblood