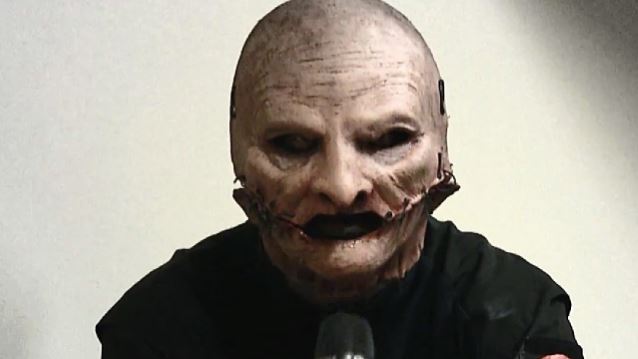 SLIPKNOT singer Corey Taylor says that his group "scares the shit out of" the music industry because "we do what we want and we say what we want," and insists that he and his bandmates "back it up, and we're as real as hell."

Speaking to The Guardian about SLIPKNOT's continued relevance more than 15 years after the release of the band's debut album, Taylor said: "No one's more surprised by our success than we are, believe me.

"If you sat down and drew this up as a play, in sports terms, it would blow up in your face.

"People have been trying to paint us into a corner and keep us down, because we scare the shit out of the rest of the industry. We do what we want and we say what we want.

"If a few people don't understand us … well, it's a war of art, in a lot of ways, and we win every time. I don't fucking know why, but one of the reasons is that we back it up, and we're as real as hell."

Corey elaborated on the reason for SLIPKNOT's unwavering success, explaining that there is substance and soul behind the cartoonish masks and outsider bravado.

"It can't just be fucking nuts all the time," Taylor said. "There's got to be something behind the eyes. That's what we've done so well. We've created something really artistic that can just turn on you at any second. It's like having that gorgeous dog … it's your pet, you love that fucking dog, it goes everywhere with you, but you never know when you're gonna wake up and its teeth are around your fucking neck. That's SLIPKNOT."

SLIPKNOT has confirmed a spring headlining tour of the U.S. with support from HATEBREED. The relatively short trek will include several festival stops and begin on April 25 at the Fort Rock festival in Fort Myers, Florida, ending on May 16 in Grand Rapids, Michigan. This is SLIPKNOT's second U.S. run in support of its latest album, ".5: The Gray Chapter", which came out in October.