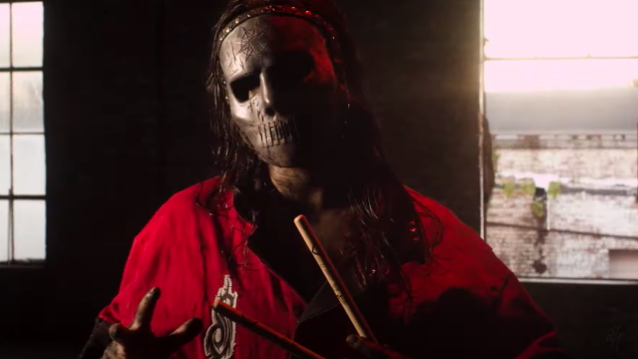 SLIPKNOT's JAY WEINBERG: Being Tight As A Band Is, To Me, Above All

SLIPKNOT's Jay Weinberg spoke to Sweetwater about how he was influenced and inspired by his father Max, who has been a member of Bruce Springsteen's E STREET BAND since 1974.

"A piece of advice that my dad passed down to me that I'm always grateful for, that's kind of key information for any drummer to have, is you're always gonna be best served with whatever practice you're doing is to a metronome," he said (see video below). "And to me, playing along to a metronome, doing exercises and just playing beats and stuff while keeping myself accountable, learning how to play with it as an instrument, to me, that's been what serves the music that I love to play. It kind of adds that frenetic energy where it feels like a freight train that's about come off the tracks, but the important thing to me is that it's gotta never come off the tracks. Being tight is, to me, above all. Any band that's impressive to me has always just been tight together."

He continued: "As I apply that to a band like SLIPKNOT, we don't play live to a metronome or anything like that; we just do what we do because we listen to each other. And the practice of hearing that metronome in my head allows me to feel the space in between notes and how I'm filling that, and that helps inform how I'm speaking musically to the guitar players and the vocalist and stuff like that. It's got that energy to it, but it always has that invisible swing that's super important to this kind of music."

Jay was asked to fill in for his dad as the touring drummer for BRUCE SPRINGSTEEN & THE E STREET BAND more than a decade ago. Last year, he described the experience as "completely insane. And I didn't expect for that to happen, but the stars aligned in that way that just like it was one of those 'right places at the right time' kind of things," he said.

SLIPKNOT spent most of last year touring in support of its sixth studio album, "We Are Not Your Kind", which was released in August 2019 via Roadrunner Records.