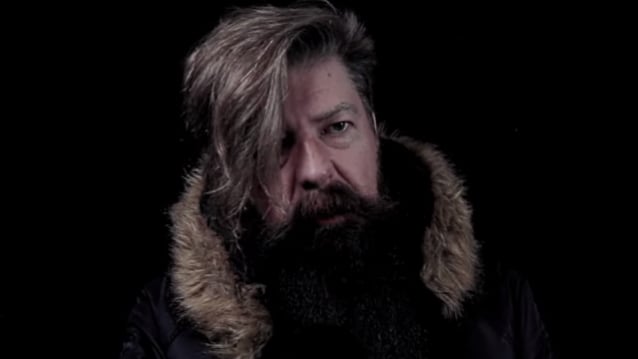 SLIPKNOT guitarist Jim Root says that he is using the coronavirus downtime to compile ideas for a possible solo album.

Root spoke about the possibility of launching a solo project during an interview with Loudwire conducted while he was in quarantine.

"Now that we have this bananas, insane pandemic thing going on, I've been trying to force myself to write," Root said (see video below).

"I've had a lot of people ask me about doing a solo project, and now I think I have a little bit of extra time to dedicate for that, so I've been writing some stuff that maybe wouldn't slide in with the SLIPKNOT world a little bit. But, like I said, I've got kind of a little bit of a writer's block thing happening right now.

"I would like to [start a solo project], just because I need to stay busy," he continued. "I didn't start a family, I never got married, I didn't do any of that stuff. And I know Corey [Taylor, SLIPKNOT singer] wants to do a solo project that's outside of STONE SOUR; he's mentioned that. And unless I'm writing for SLIPKNOT, I wouldn't know what to do with my time.

"It's easy for me to sort of write SLIPKNOT arrangements and ideas — they come kind of naturally to me, just 'cause I spent so much time with [late SLIPKNOT bassist] Paul [Gray], and writing as much as I've written on the last two records, I don't really have to think about that too much. But for a solo project, I am gonna overthink that until I'm insane and it probably may never ever come out.

"It's one of those things where it's, like, what direction do I go? Do I even think about a direction?" he added. "Do I just let it naturally come out? Do I use things that I've written and intended for SLIPKNOT that maybe SLIPKNOT didn't gravitate towards or maybe SLIPKNOT was just, like, 'Ah, it's not really very SLIPKNOT'? Not that there's any rules on what is or what is not SLIPKNOT. A good song is a good song, whether it's for this or that or the other thing.

"What would I do as a solo project? What direction would I take? I kind of get all that out essentially with all the arrangements I've written for the last couple of SLIPKNOT records. I don't know that I need another outlet. But I'm gonna try — just set a goal, maybe see if I can achieve it, type of thing. We've got time on our hands now."

SLIPKNOT spent the last year touring in support of its latest album, "We Are Not Your Kind", which came out in August.