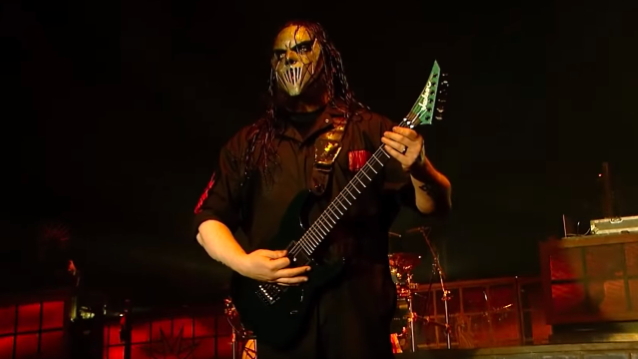 SLIPKNOT guitarist Mick Thomson was interviewed by Andertons Music Co. prior to the band's January 25 concert at the O2 Arena in London, England. You can now watch the chat below.

Speaking about the differences between doing a tour like SLIPKNOT's current European run and to the first couple of tours the band did two decades ago, Thomson said: "The first couple of tours, you're struggling for anything — food, sleep. It's just really rough when you're starting out, especially with a lot of people. You only get so much money, and it has to find its way to taking care of bills. You don't eat well, and you don't have your own hotel room. You're sharing a shower that's all pubed up and stuff. Life is a lot cushier — there's not the struggle. But the struggle is not forgotten. We still do what we do with passion. So, it's still there — it's just not as uncomfortable the rest of the day."

Asked how soon it was after SLIPKNOT started that the band was playing to audience sizes like the one at the O2, Thomson replied: "Festivals. Our first thing we ever did was Ozzfest in '99. We were the second stage; we rotated, so we didn't play in the same spot every day. I don't know what the biggest crowd there would have been. But I know that, overall, the amount of people in there was pretty huge. I don't know if that was [BLACK] SABBATH's original final tour. But having SABBATH there was fucking huge.

"Festivals are great, though, because it's not for you — it's for everybody," he explained. "So when you're pulling up with your own show, then that's when it really starts to feel, like, 'Holy shit! Look what we've done.' Because there's two bands playing tonight [before SLIPKNOT], and not 43 on three stages."

Mick also talked about the motivation for SLIPKNOT to start its own festival. Launched in 2012, Knotfest has been held across the globe, playing in the states, as well as Mexico, Japan and Colombia. Artists like DEFTONES, FIVE FINGER DEATH PUNCH, PAPA ROACH and BRING ME THE HORIZON have played Knotfest in the past.

"I think it's great for the fans and it's great for bands," Mick said. "We can put a lot of different bands that we would love to have on tour with us on something like that where normally we couldn't just take out whoever. A lot of times, trying to get recognition for some great bands that have just never got that much publicly. So I'm always really happy when we get some more underground stuff and death metal stuff that we can get on there that I would love to expose a wider audience to. I know from teaching guitar, I've turned a lot of kids on to death metal shit they've never heard of. I'll play some stuff for 'em, or they'll take a tape home, or something, and they're, like, 'Holy shit! This is brutal.' I'm, like, 'Of course it is.' I love to try to do anything I can to get exposure for bands we love. So that helps. We get to put some cool bands on."

SLIPKNOT is continuing to tour in support of its latest album, "We Are Not Your Kind", which came out last August.