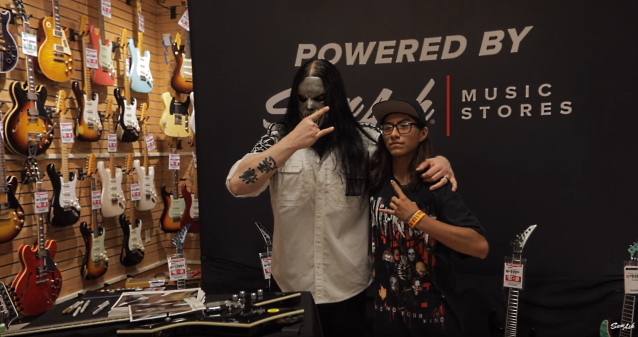 This past August, SLIPKNOT guitarist Mick Thomson stopped in to meet all of his adoring fans at Sam Ash's New York City store to take photos and sign their gear, including his new Jackson Pro Series Signature Mick Thomson Soloist SL2. Check out a video recap below.

In a 2004 interview with Guitar Player, Thomson stated about his influences: "I love all kinds of music, but I don't sound like anything except me. I hate the term 'influences.' [Jimi] Hendrix is the reason I started playing guitar, but do I sound like Hendrix? You should never sound like someone else; you should sound like yourself. To do that, you must develop your own way of playing. I used to sit in my room and experiment, and if I came up with a riff that sounded like something I thought I'd heard before, I'd toss it in the garbage."

Thomson also talked about his general approach to guitar playing, saying: "I've started to look at guitar playing from more than just a standpoint of using certain modes and techniques. I want to see the guitar in a non-linear sense that encompasses tones, arrangements, songwriting, audio production, and everything else — you have to do it all. For example, I'll look at an effect and first determine what kind of noise I can make with it, rather than doing the usual thing of performing a musical part through the effect. Having said that, I'm always hearing melodies and counterpoints in my head that I attempt to translate into guitar parts."

Join me for an in store signing with Jackson Guitars - Official! at Sam Ash Manhattan next Thursday, August 29 from 6:30pm - 8pm.