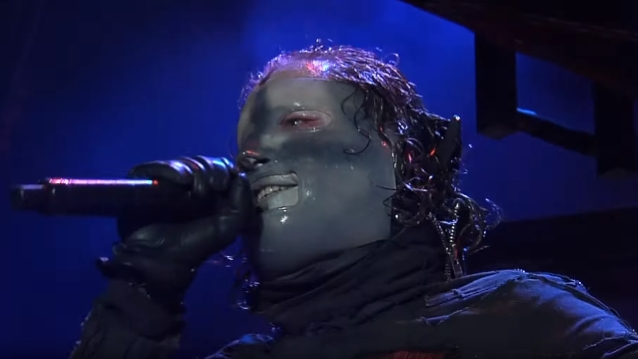 SLIPKNOT's music video for the song "Nero Forte" will make its online debut tomorrow (Monday, December 16) at 9:00 a.m. PT / 12:00 p.m. ET. The clip, which was was filmed in late October, was once again directed by percussionist M. Shawn Crahan, better known as Clown, who is also the art director for SLIPKNOT and who directed the band's DVDs.

"Nero Forte" is taken from SLIPKNOT's latest album, "We Are Not Your Kind", which came out in August.

Guitarist Jim Root recently told Kerrang! magazine about "Nero Forte": "This is a Clown song, which is amazing. This one is going to be great live. It's very percussive, and reminiscent of 'Psychosocial' [from 2008's 'All Hope Is Gone'] — but maybe an evolution of 'Psychosocial'. Obviously, Clown is a drummer and percussionist, but he's also a songwriter — and he always has been. Now we're able to collaborate as songwriters, and this is what we end up with. When Corey [Taylor, vocals] came in and started diving into the vocals, he came up with this extra melody in the chorus line very late into the process. That really drew me into this song."

Corey admitted to WhatCulture Music that he "was struggling with" the chorus to "Nero Forte" during the writing process. "Everything I wrote just didn't match the great shit that was going on and the lyrics and then that bridge," he said. "The chorus, it just always felt like the ass was falling out of it, for lack of a better term. But, honestly, I took my cue from a melody line that Clown had put on there with a keyboard, actually, which I didn't even hear that melody line until… Then he pointed it out. He was, like, 'Listen to this,' and I actually listened to it and that became the high falsetto vibe. And then I wrote the harmony to that. And then it just took off from there. So it was one of those things where — it was almost like learning a new lesson. Sometimes you don't have the best idea, but it doesn't mean that the best idea isn't there. And we just kind of went from there."