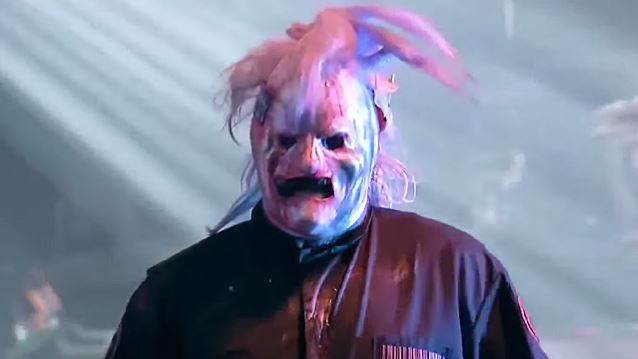 SLIPKNOT's SHAWN 'CLOWN' CRAHAN: 'I'm In The Greatest Band In The World, Period'

In a brand new interview with RollingStone.com, SLIPKNOT percussionist Shawn "Clown" Crahan was asked about his recent comment that he could see the band going forward with a whole new lineup.

"What I've been saying is that only my mind — this is all from me, this isn't from anybody else — I look at it as I'm not going to be able to do this forever," he explained. "I'm 45 years old. Hopefully I can do it until I can't walk. Sometimes I think to myself, because I have new guys and they're so young; the drummer [Jay Weinberg], I could be his dad. He's 24 years old and my daughter is 24 years old. So I look at him and think, 'Fuck, man, I could pound him into shape for the next 20 years and he'd still be fucking young.' And if I wanted to continue to do other things, I could step aside. And what better way to have the young'uns come in and learn the way? And what if SLIPKNOT could be this recycled thought process that is completely on point and just keeps going for life? That would have to be up to all of us, of course, but if people had to step aside and could bust in someone new and it was all there, that would be this band. This band could be something that's never been in this life before."

He continued: "I watch some of these fucked-up big bands that have so much decadent diva problems with each other and I laugh. Like, 'You're a grown man and you can't figure out how to work your fucking art out with another person because of money or fucking ego? I hope you fail.' So wouldn't it be cool if this shit I'm involved in could just continue through life, like an actual culture, like an emperor, like a president or a king or a queen. The lineage keeps going on and on. And the thought process is intact and it's fabulous. I'm not gonna authorize anything that's fake or full of shit. I'm talking about real stuff. That's just a dream."

Crahan did stress, however, that he is happy staying in SLIPKNOT for the foreseeable future.

"We're still well beyond everybody else," he said. "Because I know every other band and fuck them all, man. I'm in the greatest band in the world, period. End of story. We're the best."

Crahan told The Pulse Of Radio a while back that when he eventually retires from performing with SLIPKNOT, his son would be the perfect replacement. "My oldest boy, when I do skip, he's gonna take over my slot," he said. "He was sitting on the stair in diapers wearing my mask with sticks while we were downstairs trying to learn how to be a band. So when I leave, it won't be like I died and my son came in and tried to fill my place. I'm gonna bail, but I'm gonna hand over the throne and say, 'Hey, I can't do it anymore. You do it. You're my blood.'"

SLIPKNOT has been touring in support of its latest album, ".5: The Gray Chapter", which came out last October.