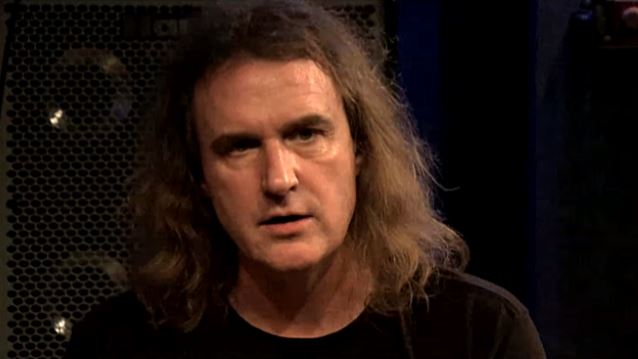 MEGADETH bassist David Ellefson took part in a question-and-answer session at this year's Comicpalooza international comic convention, which was held May 22-25 in Houston, Texas. You can now listen to the chat using the audio player below (courtesy of MSRcast). A couple of excerpts follow below (transcribed by BLABBERMOUTH.NET).

"Last year, MEGADETH went through a management change and a few different things. And a year off the road is a long time for a group. And not necessarily for the MEGADETH name, but.. Shawn Drover, our drummer, and Chris Broderick, our guitar player, were inspired to write some songs together. They'd actually asked me to be part of it with 'em. And it didn't ever, kind of, feel 'at home' to me. I mean, I didn't really wanna leave MEGADETH to go do it. But I'm always up for doing some things on the side… Shawn and Chris made the decision to leave. And so, of course, that leaves us looking at, 'What are we gonna do?' And now, the first thing fans said is, 'Oh my God! Get Nick Menza and Marty Friedman back. Do the 'Rust In Peace' reunion.' Blah blah blah. And I've gotta be honest with you: Dave [Mustaine, MEGADETH mainman] was completely receptive to any and all options — probably more than I've ever seen… absolutely more than I've ever seen him — ever. Ever. So he definitely should not ever be painted as a bad guy that that lineup [reunion] did not happen. He was as open to it… He called me… I was in South America, ironically, playing a show with Kiko [Loureiro], our new guitar player, on a 'Metal Allstars' tour. And it was Geoff Tate, myself… Kiko's band, ANGRA, was one of the support acts, and Kiko came up and played with me and Geoff Tate on some songs. And I looked at Kiko and I went, 'You know, if anything would ever happen, he might be a guy to keep his number, just in case MEGADETH ever needed a guitar player.'… So Dave called me, and he said, 'What do you think about Nick Menza? I'm getting some reports from some people I trust that we should consider maybe doing this reunion.' So we talked about it. And I've been friends with… I'm the one guy who's been friends with all the former MEGADETH members. And so I said, 'Well, listen, I think we should at least try it.' I said, 'Before we do anything, though, let's get in a room with Nick,' which we did — me and Dave and Nick, at Dave's studio in California. And I said, 'Let's try it. First and foremost, let's be musicians and see if can play good together, and if we can play good together, let's see, then, if we even like each other.' Because that's another big part of being in a group together — hopefully you at least kind of, sort of can stand each other. And so we did. And we just realized… It's, like, we had a lot of laughs and it was fun, but I think Dave and I felt right away that musically… We weren't convinced that it was the next chapter of MEGADETH. And to go back and just do a cash grab, it would be short-lived, and I think our fans… Again, the transparency of the metal fans… They would know right away. And it's, like, you can never do things just for the money. You can do things that make you money, but you can never do it just for the money, when you're dealing with art and you're dealing with artistic things. You just can't do it. I mean, sequels of movies, right?! How many of those have we seen? And we know that there's a financial prize in that, but seldom are they ever as good as the first one. It's just hard to bring those things together, yet somehow in rock bands, people think, 'Just call the guys up and get 'em together and it'll be great, like it was in 1992.' But people move on, and people's playing styles change. Dave and I have been very blessed to play with, really, some of the best musicians in the world, both in metal and otherwise. And we had a meeting at NAMM in January, where we sat down with Marty and Nick and our manager [at the time]. And I've gotta be honest with you: Dave, again, was as open as he could have ever been to having a reunion and trying to make it work. And, if anything, I was the 'bad cop' of that. I let Dave be the 'good cop' for a change. As partners, I thought, 'He always gets the bad rap. I'll be the guy, kind of, stirring the waters, and I'll let him be the good guy.' And we gave it every possible opportunity for it to work, and it just really… Dave and I walked out of that meeting [thinking], 'Yeah, I don't think it's gonna happen.' And we just really had to be honest with ourselves and preserve the name 'MEGADETH.' And also, MEGADETH doesn't… Our creative days are not over. I mean, we have still music in us. We're not just a nostalgia act to go play the hits of the glory days. We have a lot of music in us, so here we are with the new record."

"Chris Adler, from LAMB OF GOD, played on it, played drums, who's a total badass. And you're gonna hear Chris playing different on this new record than you would hear him in LAMB OF GOD. I talked to Chris. I said, 'This is gonna be an opportunity for you to broaden your horizons and be more than just who everyone knows you, doing the blast beats and your LAMB OF GOD thing.' So, musically, for him, I think it was a really good… a great season of maybe growing in some new directions with his drumming, which is great. And Kiko is really… I mean, I didn't realize back in November when I played with him… I knew he was good, but I didn't realize how great he is as a… not just a guitar player, but as a musician. I mean, this guy… he'll walk in a room and go, 'That's a G sharp.' I'm, like,' What are you talking about?' He'll go,' That note right there. In the middle of those 85 notes, that's a G sharp…' [And I'm, like] 'How did you…?' Me and Dave are, like, 'We hate him. This guy's too good. Get him out of here.' So, no… But Kiko is just a fantastic… And again, you wonder… We played with some great musicians. I mean, Marty Friedman, there's a reason why people like him in MEGADETH. He really brought a unique stamp to the sound. He changed the MEGADETH sound in a way that really improved it. And I was sitting there, going, 'How are we ever gonna get a guy that's gonna do something like that again?' And I've gotta be honest with you: I think Kikois that guy."

On who will play drums for MEGADETH when it's time to play shows again:

"Chris [Adler] is such a fan of MEGADETH. Chris playing with MEGADETH would be like me joining KISS. We're, like, his favorite band ever and the band that got him into music. I mean, he's so humbly appreciative of the opportunity and being part of this. And so, anyway, we've talked about shows coming up, [and] Chris was, like, 'Dude, I'll move anything I can anywhere to try to make it happen; I just wanna play with MEGADETH.' He may play one show with us and go, 'That's it. I'm done. I don't ever wanna do that again.' So we'll find out as it's coming up. But the goal is Chris would like to play with us as much as possible. And we are still looking to where is the best time to release this new [MEGADETH] record, so as we're looking at some dates coming up, they're not necessarily predicated on the new album being out. And I guess it's kind of cool thing with MEGADETH — we can play shows and not necessarily have to have a new album to go play those [dates]."