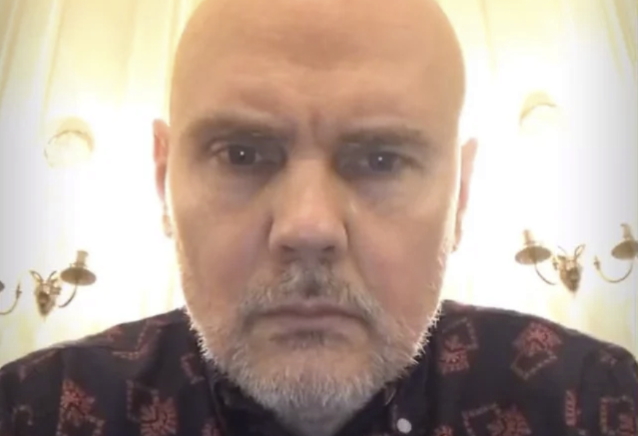 SMASHING PUMPKINS mainman Billy Corgan is mourning the death of his father, musician William Corgan Sr. The 74-year-old reportedly suffered a heart attack on Friday (December 17) while in his home. Paramedics arrived to find him dead, before miraculously reviving him for a short time. En route via helicopter to a medical facility, he passed away.

On Saturday (December 18),Corgan shared a video tribute to his father in which he said: "My father had his own struggles with music and had a very complicated and oftentimes bitter relationship with the music business. He assumed that I would have the same. It all started with him, watching him play in basements and at soundchecks and empty stinking bars."

Later on Saturday, Billy was joined by his partner Chloe Mendel and their two kids for their annual Christmas show at Corgan's vegan tea shop, Madame Zuzu's, in the Chicago suburb of Highland Park. While there, he performed "Do You Hear What I Hear?" with his young daughter Philomena, along with two holiday originals, "Evergreen" and "The Magi And The Shiny Bright".

A year ago, Billy told journalist Jenniffer Weigel tha the "actually started [work on] a Christmas album a couple of years ago. We kind of did it quick, and I wasn't satisfied with the results, so I junked it all," he revealed. "But I had written some songs, and I had found some cool obscure songs, and picked a couple of classics that I liked. I hope we get around to it some time, but at the moment, it's completely stalled."

Corgan previously floated the idea of making a PUMPKINS Christmas album in a 2018 interview with USA Today. Asked at the time if the LP would include covers or be all original material, Billy said: "It would be a mixture. I have released two Christmas songs, and I was thinking it would be nice to re-record those in the context of the record we would make. It would be probably lean more acoustic. I would think it's a bit weird [to make] wild Christmas records. Although, I also like 'Jingle Bell Rock', which is basically 1950s rockabilly. But I don't know. When I think Christmas music, I tend to think something you want to put on and sit around the tree with the kids and not rock out to. I don't see us doing a rocking-out Christmas album."

Back in 1997, Corgan wrote and recorded "Christmastime" for "A Very Special Christmas 3".

SMASHING PUMPKINS' latest album, "Cyr", was released in November 2020 via Sumerian Records. The 20-song follow-up to 2018's "Shiny And Oh So Bright, Vol. 1 / LP: No Past. No Future. No Sun." was produced by Corgan. It features founding members Corgan, Jimmy Chamberlin and James Iha, along with longtime guitarist Jeff Schroeder.