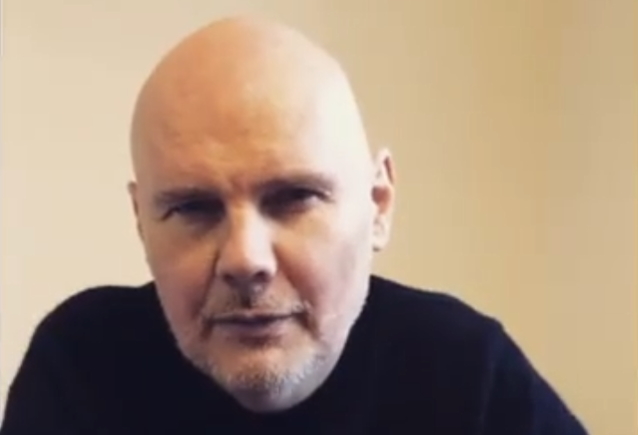 SMASHING PUMPKINS frontman Billy Corgan spoke to Australia's Triple M radio station about how today's divisive political climate could shape the new sound of protest music in the coming years. He said (see video below): "I'm curious about that, because the one thing that I think is historically different about this time, if you look at the turbulent '60s or the turbulent '70s in the U.K., stuff like that, there seems to be almost a consensus between the musical class and the political class, so there doesn't seem to be friction. I mean, there's friction against one political party, but there doesn't really seem to be a counterculture, which is kind of strange.

"Like they said in the last election — this is not my words; this is what I read, somebody said — if you're in agreement with the big tech companies, the government and the media, you're not against anything," he continued. "So it's kind of strange — and I'm saying this for young musicians — will there be a class of musicians that rises up against what is now seemingly a social consensus in America? Because I can't say that's ever been the case that I've ever seen in my lifetime, and going back historically, that hasn't been the case. There's a weird alignment that's going on that doesn't seem to be engendering protest music; it seems to be more self-congratulations or something.

"Maybe we're reaching a point where people are less inclined to believe in one side or the other, and more inclined to think about, not the middle, but is there some other version of things," Corgan added. "Because maybe that story has sort of worn itself out. I know it has in America. It's so divisive that people don't even talk about it anymore. We've reached a point where people have even stopped talking, 'cause there's just nothing to talk about."

According to Billy, his goal is to become an artist that can provide comfort, relief and positive energy to people. "As a public artist, part of my job is to be able to talk to everybody," he said. "When I look at an audience, I don't think, 'What side are you on politically?' 'What side are you on socially?' — I just wanna wanna be able to communicate. So an artist by definition is supposed to be a unifying figure. I really want everybody to get along; I really believe everybody should have the great chance at the American Dream — all that stuff. So it's hard to watch the divisiveness. And there's plenty of blame to go around. I don't think one side is great and one side is bad; I think they're all messed up."

SMASHING PUMPKINS' new album, "Cyr", was released on November 27 via Sumerian Records. The 20-song follow-up to 2018's "Shiny And Oh So Bright, Vol. 1 / LP: No Past. No Future. No Sun." was produced by Corgan. It features founding members Corgan, Jimmy Chamberlin and James Iha, along with longtime guitarist Jeff Schroeder.