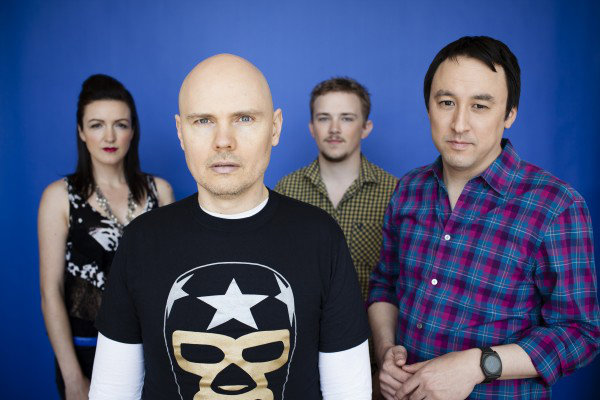 Back in March, it was announced that SMASHING PUMPKINS had signed an Artist Services deal with BMG. Via Martha's Music/BMG, they will issue two new SMASHING PUMPKINS albums in 2015: "Monuments To An Elegy" and "Day For Night". The first single is expected to be released by year's end.

The PUMPKINS' Billy Corgan says: "Thrilled to report that we now have our album in total, as top songs are arranged and set for drum tracking. So over the next three days, I'll be focusing on vocal arrangements, lyrics, and tweaking the overall aesthetics of the record as I hope it shall be. At least then I'll be able to share a different narrative for a spell, and get off this merry-go-round we've all been on."

Corgan also revealed the tentative track listing for "Monuments To An Elegy". It is as follows (all titles subject to change):

"Monuments To An Elegy" is being produced by Howard Willing, who first worked with SMASHING PUMPKINS during the "Adore" sessions

The PUMPKINS released their last studio album in 2012: "Oceania", which entered The Billboard 200 chart at No. 4, earned the No. 1 spot on the Independent Albums chart and garnered vast critical acclaim.

SMASHING PUMPKINS have created one of the most acclaimed bodies of work in musical history having sold more than 30 million albums, and won multiple Grammy Awards in the process. Formed in Chicago in 1988, they released "Gish", their influential and platinum debut in 1991, which was followed by albums including the nine-time platinum "Mellon Collie And The Infinite Sadness" and the four-time platinum "Siamese Dream", as well as the platinum certified 1998 album "Adore". The group's many hits defined the alternative music era and continue to resonate on modern rock radio, influencing a whole new generation. The PUMPKINS returned in 2007 with their acclaimed sixth album, "Zeitgeist". They have since remained on the cutting edge of music and technology with various online releases.