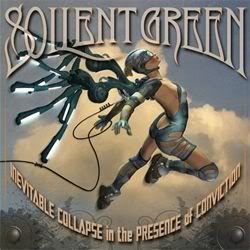 01. Mental Acupuncture
02. Blessed In The Arms Of Servitude
03. In The Same Breath
04. Antioxidant
05. Lovesick
06. Rock Paper Scissors
07. Superstition Aimed At One's Skull
08. For Lack Of Perfect Words
09. When All Roads Lead To Rome
10. All This Good Intention Wasted In The Wake Of Apathy
11. A Pale Horse And The Story Of The End

"It's definitely the most level-headed record we've done in a long time," comments guitarist Brian Patton, whose more-lethal-than-ever guitar skills add a new dimension to the SOILENT landscape. "All the chaos we've had in the past few years has kind of calmed down a bit."

Based loosely around the band's history of struggle and general feelings of hopelessness and dejection and punctuated by John Van Fleet's striking cover design, "Inevitable Collapse" is a 42 minute soundtrack to reality; Ben Falgoust's varying vocal tones and cutting verbalization bringing its concept to the forefront with crippling urgency.

"It's the basic idea of no hope. It's in reference to the history of SOILENT GREEN and also just life in general," Falgoust notes of the record's unofficial theme. "Everybody is always picturing things with a happy ending, but life's not always like that. Every individual out there gets to a point where they feel like they've struggled to a point and never got anything out of it. It happens every day. That's the point of this record. Sometimes, even when you put your all into something and work hard, things don't always work out in the end. That's just the way life falls sometimes."

"It's a pretty heavy name," adds Patton. "I came up with it. I've been dealing with a lot of issues in life. We've had a lot of deaths in our little circle. Glenn (Rambo, original vocalist) passed away in the hurricane, our old bass player ended up getting shot and you know, we've had a lot of issues with just family. It hasn't been all peaches and cream out in this area. So it's just a depression type theme; when you're given hope and it's taken from you. It's pretty heavy. Ben's got a lot going on in his brain so. And I must say," he adds with a laugh, "he makes it really hard for crowds to yell out titles of songs."

"This record has something new to it — a new edge, I'd say," Falgoust tells MTV.com. "I don't want to be the guy who says this is our best record yet — all I can say is, when it comes out, you'll just have to check it out, and everyone will have to judge it for themselves. The sound on this record is fucking amazing; it's just all-out. The guitars sound so sick. I thought 'Confrontation' was awesome, but I think we blew that record out. [This album] sounds ridiculous."

The singer said that, with "Inevitable Collapse", SOILENT GREEN wanted to create a guitar lover's wet dream. While some bands focus more on making the drum or vocal parts more prominent on their albums, SOILENT wanted the guitars to stand out more.

"The defining feature of a metal band is the guitars — it's what metal is," he explains to MTV.com. "How many records have come out in the last few years that are supposed to be metal, and the guitars are wimpy and low in the mix, and the vocals and drums are overpowering? On a metal record, the guitars are supposed to stand out — and they do on this record. Patton's tone is really good, and Rutan brought that shit out. Don't get me wrong — you can hear the drums, and the flow of the bass underneath, and the vocals. But the guitars are just lethal and have that low-end bite to them. It just sounds awesome."

Touted as "one of the ten most important hard and heavy bands" by Rolling Stone magazine, SOILENT GREEN has been releasing consistently brutal and groove-laden albums since their first full-length, "Pussysoul", in 1994.