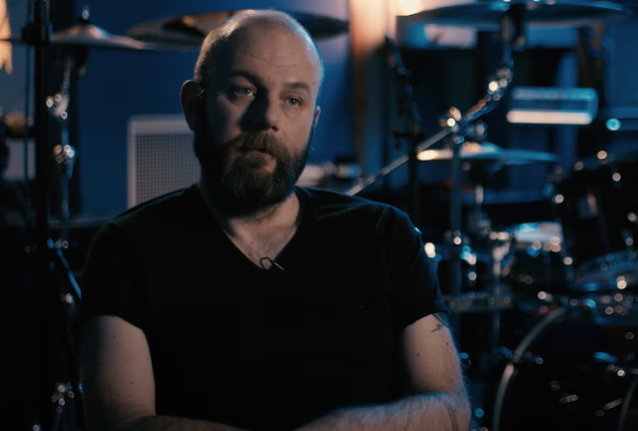 Swedish metallers SOILWORK have announced the passing of their guitarist David Andersson. He was 47 years old.

Earlier today (Wednesday, September 14),the band released the following statement via social media: "We are deeply saddened today, as we bring the terrible news of David Andersson's passing. He was one of a kind and a brilliant man in so many ways. He was our guitarist for more than 10 years and had a big impact on SOILWORK's musical journey forward. Sadly alcohol and mental illness took you away from us. We will miss him dearly and will continue to carry the musical legacy that he was a part of. Our deepest condolences goes out to his family. Forever grateful for the time we spent with you and all the good laughs.

"Thank you Dr. Dave. See you on the other side.

"We encourage everyone to respect the privacy of David's family and friends in these tragic times."

In addition to being a longtime member of SOILWORK, David played in THE NIGHT FLIGHT ORCHESTRA alongside SOILWORK singer Björn Strid.

THE NIGHT FLIGHT ORCHESTRA said in a separate statement: "Goodnight sweet doctor. We all hope you've finally found peace. We will miss you so much. You were one of a kind and a brilliant musician. Sadly alcohol and mental illness took you away from us. It hurts so much. Our deepest condolences goes out to David Andersson's family on this difficult day. He's music will live on forever. Thank you for all the unforgettable times together. See you on the other side."

Andersson officially joined SOILWORK in 2012 as the replacement for Peter Wichers. Prior to becoming a member of SOILWORK, Andersson had toured on and off with the band since 2006.

In a 2020 interview with Hardrock Haven, Andersson stated about his musical evolution: "I tried to have a career as a rock musician and a songwriter when I was 20 and made a few records with a band on an American label, but it just didn't go anywhere and we split. I gave up on music for a while then and became a doctor, but back in 2006 I got the chance to start playing with SOILWORK and that was when my career sort of restarted. I didn't see that coming 'cause when I first gave up on my rock-star game I was, like, 22 or 23 so it's all been my surprise. I've been on this level for around 14 years now and it just keeps getting better, I think… I hope. [Laughs] I'm still surprised and also extremely grateful that I got the chance to do this eventually, 'cause that's what I always wanted to do growing up."

Last year, Andersson spoke to Metal Insider about how he has been personally affected by the coronavirus pandemic. He said: "I'm a doctor myself, a medical doctor; that's my day job. I've been working with COVID patients and I have good friends who are doing quite highly esteemed research on COVID, and so I'm quite well-read when it comes to the whole pandemic thing. And even the top researchers and experts in the world, they're still a little bit unsure and it sort of pisses me off. When everyone has gone out on social media and thinking that they know the truth, when there are people that have devoted their entire lives to virology and epidemiology still being a bit unsure on what's right, it's a shame that."

He continued: "If you have a bunch of doctors and professors and scientists saying that you should be careful, then you have some random dude saying, 'I heard that it's safe and we can just do whatever the fuck we want and drink beers and go to a rock festival,' of course, if you've lived with this pandemic for years of course you want to believe that dude, who says it's safe and it's all fake news and everyone's lying to you. I can totally understand why you would choose that alternative if you're not willing to listen to facts, that's just the way it is, that's human nature."

SOILWORK was formed in Helsingborg in 1995. Following two highly acclaimed albums, "Steel Bath Suicide" (1998) and "The Chainheart Machine" (1999) on Listenable Records, SOILWORK joined the Nuclear Blast roster in 2001. The band's unique blend of melodic metal developed at a staggering rate as they released a new bombshell each year, touring aggressively throughout North America, Europe, Australia, and Japan. Some of the highlights included Ozzfest alongside headliners BLACK SABBATH and IRON MAIDEN and an arena tour with LAMB OF GOD and KILLSWITCH ENGAGE.

Posted by Soilwork on Wednesday, September 14, 2022

Goodnight sweet doctor.
We all hope you’ve finally found peace. We will miss you so much. You were one of a kind and a...

Posted by The Night Flight Orchestra on Wednesday, September 14, 2022